Magician
Soren (セネリオ Senerio, romanized as Senerio in the Japanese versions) is a playable character and a hero in Fire Emblem: Path of Radiance and Fire Emblem: Radiant Dawn. He is the staff officer and strategist of the Greil Mercenaries. He starts out as a mage. Initially, Soren was suspected to be a Spirit Charmer — one who has made a special pact with the supernatural; in actuality, he is Branded — someone born with both beorc and laguz blood, and has experienced prejudice from both societies. Since Ike rescued him from starvation, Soren has been rooted to the commander with unwavering loyalty.

In Fire Emblem: Path of Radiance, he gives Ike a report of their most recent battle outcomes.

He was voiced by Ayumu Murase in the Japanese version, and by Kyle McCarley in the English version.

Soren is know for being cold, distant, and rude to others. He is very distrustful and does not enjoy being around people save for Ike. This makes him appear very high-strung, though Titania believes he is actually a very empathetic person. After the Mad King's War, Soren becomes more approachable, and is seen talking to others. It's also noted that while he isn't very sociable, he's no longer distant.

Soren is an extremely cynical individual, to the point of amorality. Most of his decisions are based on what will benefit the group and often becomes increasingly frustrated when his comrades put morality before logic and help others despite there being nothing to gain. During his introduction, Soren even suggested allying with Daein when they attacked Crimea as they had a higher likelihood of winning the war, and grew aggravated when Titania disagreed and cited the Crimean soldiers' bravery as an advantage against Daein. At one point, he suggested saving the Empress which caused Ike to ask if Soren was feeling alright, only to retract the statement when the tactician revealed his motive for doing so was to put Sanaki in their debt. Nevertheless, his tactics and advice are often a deciding factor in battles, and as such he is considered invaluable to the mercenaries.

Soren is brutally honest, with his reasoning being even if he sugar-coated his words, the meaning would still be the same. This leads him to say many things in a painfully blunt manner, regardless of anyone's feelings. An example of this is when recruiting Volke, Soren directly states he can easily be controlled with money, while standing directly next to the man in question and not apologizing even when it is pointed out. Another time, he refers to the Apostle seeing Crimea and Elincia as 'beneath her', prompting even Ike call out his tactlessness, though this is one of the few times he actually amends his behaviour and agrees to be more polite. In the face of this, there is some benefit to his bluntness, as he is willing to say the cold, hard truth when no one else will, albeit in an extremely harsh way. When Elincia was overjoyed the Begnion troops were helping her cause, he explained that they were not aiding her altruistically and instead sought to control Crimea.

Ike is an extremely important person to Soren, being the first person to show him decency. After meeting only once as children, Soren spent several years searching for him again. Ike is also the sole person Soren is willing to open up to as well as his only friend, becoming one of the few people aware that he is not a Spirit-Charmer, and learns Soren is very afraid of the possibility of rejection. The sage is also known to be highly attuned to Ike's well-being, being able to pick up on slight changes in his demeanor and ensuring Ike is caring for himself properly. As a result, Ike believes Soren is far more compassionate than he presents himself to be. Micaiah also seems to share this oppinion, as after meeting Soren described him as having a frozen heart with a warm core. Soren is entirely devoted to Ike and even refuses Stefan's invitation to join his group of Branded, even though it would mean no longer facing discrimination. In the same conversation, Stefan explained that Soren would likely outlive Ike, though Soren made it clear he would never leave him.

Soren greatly dislikes laguz, due to their treatment of him as a child, and is not above insulting them or referring to his own allies as 'sub-humans'. By Radiant Dawn he softens slightly.

Oddly enough, Soren demonstrates he is capable of being charming and tactful in spite of usual harshness. When discovering Aimee trying to trick Ike into getting together with her by making him flirt with her in exchange for free goods, Soren steps in and delivers an entire romantic speech, eventually wearing her down enough that she halves the price of everything.

It's found that Soren dislikes being interrupted, and often becomes frustrated and annoyed when others do so, especially when he is trying to explain a strategy.

Soren was born to King Ashnard and Lady Almedha, a beorc and a black dragon laguz, though Almedha lost her powers due to this. Shortly after, Ashnard became obsessed with him, hoping his son had special powers, but lost interest after realizing this was not the case. He then used Soren as bait to trap Rajaion, Almedha's brother, and successfully captured him, making the dragon prince into a Feral One and his personal mount. Almedha lost her mind from the atrocities around her and Soren was somehow separated from his parents.

Soren was taken in by a woman who was physically and verbally abusive towards him, only taking care of him 'out of a sense of duty'. When Soren was four years old, the woman approached by a sage who she sold the boy to, and was deliriously happy to be rid of him. Unfortunately, the sage only wanted someone to pass his down skills to before he died and had mistook Soren's brand for the mark of a Spirit Charmer. The sage put him through rigorous magic training and worked him endlessly, eventually teaching him magic.

The sage died two years later and Soren nearly starved to death after eating the last of the food stores, forcing him to move on. He went to a nearby beorc village and tried to get help, but was chased off. Soren also realized that no one had taught him to speak, though he was able to read and write quite well. During this time he became accustomed to villagers hurling stones or beating him with sticks.

Soren eventually met a young Ike, who found him in the woods. Ike gave him his lunch, and invited Soren to his house, though the boy refused, believing it was a trick. Ike then promised to return the next day with food, which Soren agreed to. However, the next day, after touching Lehran's Medallion, Greil went insane, massacring the village and only stopping after killing his wife. Soren arrived afterwards and inspected the corpses but did not find Ike. Deciding the other boy was safe, he travelled to Crimea in search of him, and encountered many laguz along the way. He discovered that rather than attack him as the beorc did, the laguz pretended he didn't exist, beginning his hatred for them.

Soren eventually took refuge in a church where he was once again mistaken for a Spirit Charmer. The church workers were kind to him and taught him how to speak and behave. After a while he left and wandered for several years before reuniting with Ike and joining the Greil Mercenaries.

Some time later, during the main game, Soren travelled to Crimea to study at the royal library and worked with another group of mercenaries. He witnessed Daein's attack on Crimea and immediately returned to the Greil Mercenaries, informing them of what happened and afterwards becoming the main strategist.

Soren returns with the rest of the Greil Mercenaries to save Lucia from being executed. He appears during a cutscene and is nearly ambushed before Mia takes down the attacker. He becomes the tactician for the Laguz Alliance, though his cautious approach often came to a head against Skrimir's recklessness. However, the lion prince eventually came to respect Soren's strategies due to the sage's ingenious plans winning them numerous battles.

In two secret scenes during the epilogue, Pelleas informs Almedha that he is not her son after realizing the heir had to be a Branded and Izuka lied to them. He directs her to meet Ike and she takes Kurthnaga along with her. Just as they are about to leave, Almedha encounters Soren and realizes he is her son and the true prince of Daein. Though she is proud of her son, she keeps his history a secret.

If he achieves A support with Ike, Soren will accompany him as they travel to new lands.

Soren appears as a SpotPass character in Fire Emblem Awakening

Soren is a playable character in the gacha mobile game, Fire Emblem Heroes. He was added on April 26, 2017, under the "World of Radiance" banner, his valentine variation was added on february 8, 2019, under the "Greil's Devoted" banner.

In Super Smash Bros. Ultimate. Soren appears as an novice-ranked support spirit in World of Light who increases the user's magic attacks. His spirit battle is agains green Robin and Ike on the battlefield form of the Temple Stage 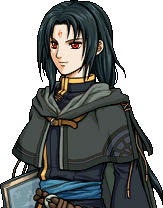 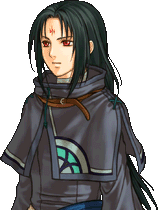 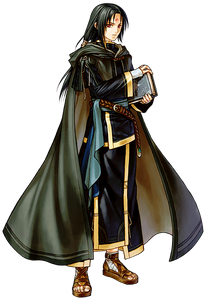 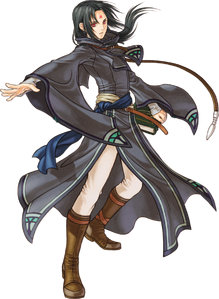 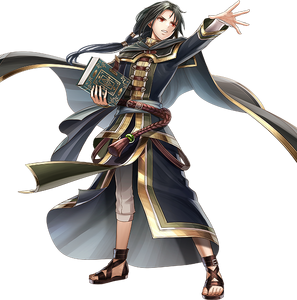 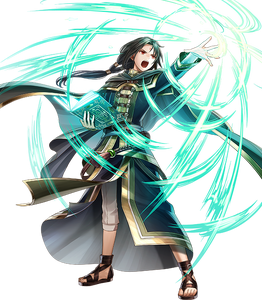 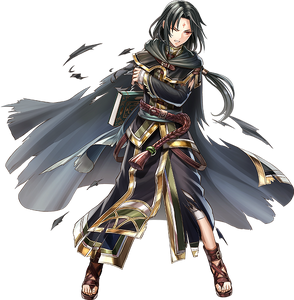 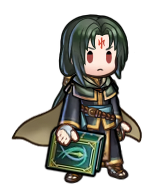 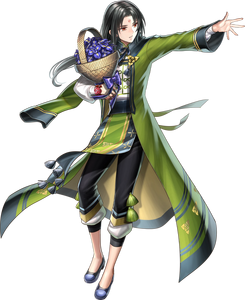 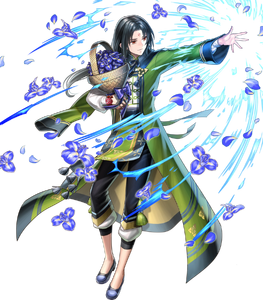 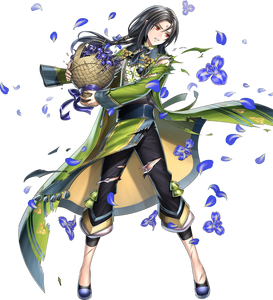 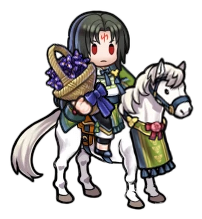 Valentine Soren's sprite from Fire Emblem Heroes.
Add a photo to this gallery

Retrieved from "https://hero.fandom.com/wiki/Soren_(Fire_Emblem)?oldid=2119705"
Community content is available under CC-BY-SA unless otherwise noted.