To battle the Pure Ones

Soren is a male Barn Owl, or Tyto alba, the main protagonist of the first six Guardians of Ga'Hoole books (as well as the film adaptation based from the books) and the deuteragonist of the second half, as well as the leader of the band, the Colliering and Weather Interpretation Chaws, the creator of the chaw of chaws and the current King of the Great Ga'Hoole Tree. He was the second son and middle child of the late owls Noctus and Marella, the mate of Pellimore and the father of Blythe, Bell, and Sebastiana (also nicknamed "Bash"), the brother of Kludd (later known as Metal Beak) and Eglantine and the uncle of Coryn (who takes Soren's place as protagonist in the second half of the series).

In the 2010 film adaptation, he was voiced by Jim Sturgess.

Soren is born during autumn in the forest of Tyto as the second child of Noctus and Marella, whose eldest child Kludd was born at the end of summer. When Soren is around two weeks old, his and Kludd's sister Eglantine is born. Sometime after this whilst his parents are out hunting, Soren mysteriously falls from his family's nest onto the ground below (he later learns that he was actually pushed by Kludd, who did it as part of his initiation into a group of evil owls called the Pure Ones) and is snatched by an owl from St Aegolius Academy for Orphaned Owls (or St Aggie's for short), but later escapes and with his friends Gylfie, Twilight and Digger.

He later battles the Pure Ones led by Kludd (who is also known as Metal Beak, due to wearing a metal mask to cover his disfigured face, half of which was torn off after Kludd battled and killed the previous leader of the Pure Ones) and his mate Nyra.

He also becomes orphaned after Kludd and the Pure Ones kill Noctus and Marella and took Eglantine, who was later rescued. He later battles Kludd, but cannot bring himself to kill him. However when Kludd hurts Gylfie, Soren prepares to kill his brother only for Twilight to do it for him.

Soren later meets and falls in love with a female Barn Owl named Pellimore and has three daughters with her named Blythe, Bell, and Sebastiana.

He later became the King of the Great Ga'Hoole Tree after his nephew Coryn was killed by an owl named The Striga, whom Soren kills immediately afterwards.

Soren is first seen playing as Lyze of Kiel (whilst donning a leaf helmet) in a reenactment of the Battle of the Ice Claws with Eglantine, whilst an annoyed Kludd (who in this film is a separate owl from Metal Beak, whose real name is Surtr) watches on. Soren and Kludd later go branching with Noctus where Soren succeds better than Kludd, who accuses Soren of having a head start. Just then, Marella arrives to go hunting with Noctus, who gives Soren back his leaf helmet, which Kludd teases him about as they go inside.

Soren then witnesses Eglantine having her first pellet, which makes the family's nestsnake Mrs. P take her to see Soren and Kludd's first pellets. Soren invites Kludd to go branching again, but at first Kludd refuses, believing that Soren will show off again, but changes his mind when Soren says they could play Battle of the Ice Claws again. But when Soren starts talking about Lyze of Kiel, an annoyed Kludd shoves him to make him stop, but this causes Soren to lose his balance and send him and Kludd off their tree onto the ground below, where they are attacked by a Tasmanian Devil and then snatched by Jatt and Jutt who take them to the Pure One controlled St. Aggie's. During the journey there, Soren meets and befriends an Elf Owl named Gylfie (who has been snatched by an owl named Grimble). When at St. Aggie's, Soren and Gylfie are made pickers by the Pure Ones' Queen Nyra after they protest, whilst Kludd turns against Soren (possibly out of love for Nyra) to become a Pure One soldier.

Soren, Gylfie and several other owlets are then taken to be moonblinked (where if an owl falls asleep under the moon, they lose their identity and go into a trance). Luckily, Soren and Gylfie are able to stay awake and pretend to be moonblinked. Afterwards, the owlets are sent to search for flecks through pellets. Grimble, who is watching the process, takes Soren and Gylfie away from the other owlets and reveals to them that he is only working for the Pure Ones in order to protect his family. Grimble then teaches the two young owls how to fly in order to escape and find the Guardians of Ga'Hoole. However, soon after, Nyra arrives with Kludd and two Pure One guards to attempt to recruit Soren into being a soldier. Grimble fights off the guards and begins to strangle Nyra and tells Kludd to go home with Soren and Gylfie. But Kludd after seeing Nyra struggling to breathe, refuses and comes to Nyra's aid. During this, Soren and Gylfie escape to find Ga'Hoole.

Along the way, Soren along with Gylfie, meets and befriends two other Owls named Digger and Twilight and reunites with Mrs. P (who had been searching for him and Kludd). The group are later at attacked by crows, but are saved by the Guardians. During his stay at the Great Ga'Hoole Tree, Soren meets Ezylryb, who turns out to be Lyze of Kiel. Eventually, one Guardian named Allomere returns to the tree with two moonblinked owlets, one of which turns out to be Eglantine. After hearing from Allomere that the Pure Ones plan to use a fleck powered device, the Guardians set off to stop them, whilst Soren, on the advice of Ezylryb, stays behind to care for Eglantine. Soren is able to break his sister from her trance by talking about the legends of Ga'Hoole. Eglantine reveals to Soren that it was Kludd that moonblinked her and gave her to Allomere, which makes Soren realize that Allomere is in league with the Pure Ones. Soren sets out with Gylfie, Digger and Twilight to help the Guardians, and find them paralysed by the device. The device is deactivated and the Guardians begin to battle the Pure Ones.

Soren sees Kludd and goes after him, only for Kludd to attack him and declare that the Pure Ones believed in him like no one ever has. During the fight, Kludd breaks his wing and dangles above a forest fire. He pleads for Soren to help him, but when Soren tries to, Kludd tries to throw him into the fire, only for the branch he is clinging onto snaps and sends him falling into the flames. Believing his brother to be dead, an devastated and angered Soren picks up a burning branch and goes to confront Metal Beak to stop him destroying another owl's life, like he did to Kludd's.

Soren finds Metal Beak and Nyra attacking Ezylryb, and comes to his mentor's aid by attacking Metal Beak. The older owl gains the upper talon and prepares to kill Soren. But luckily, Soren is able to grab the branch and impales Metal Beak with it, killing him. Following this, a shocked Nyra retreats with the remaining Pure Ones.

When returning to the Great Ga'Hoole Tree, Soren reunites with Eglantine, Mrs. P and his parents, who express their pride in him. Afterwards, Soren along with Gylfie, Digger and Twilight, is made a Guardian.

Soren is then seen telling a group of young owlets about his adventure and tells them that Kludd was never found. However unbeknownst to Soren, Kludd had survived the fire and came across Metal Beak's body and presumably takes his mask for himself. 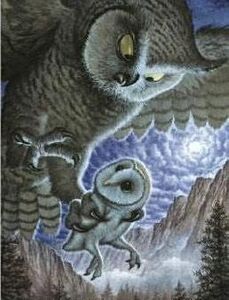 Young Soren being taken to St. Aegolius on the cover of "The Capture". 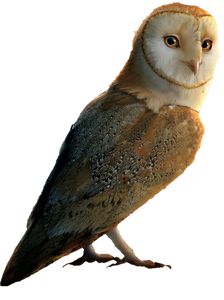 Soren's render in the Film.

Soren and Eglantine playing Battle of the Ice Claws whilst their parents and Kludd watch on.

Soren with Eglantine and Kludd (before he became a Pure One)

Soren, his siblings and his nestsnake Mrs. P

Soren, Eglantine and the Band 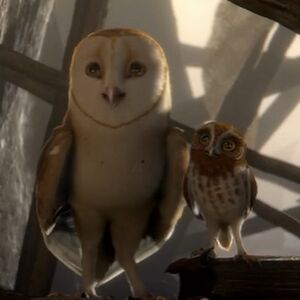 Soren and the Band 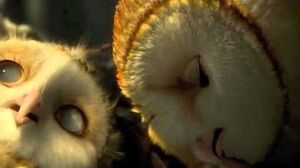 Soren during his battle with Kludd 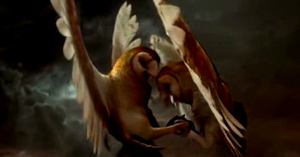 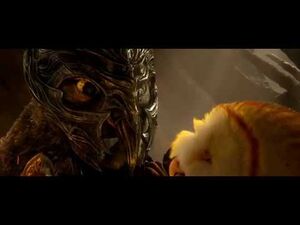 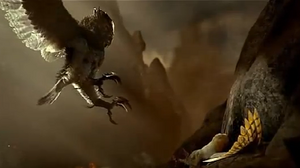 Soren with Eglantine, their parents Noctus and Marella and Mrs. P