Pokemon: I Choose You!

Sorrel (ソウジ Souji)) is a major character the 21st Pokémon Movie Pokemon I Choose You! He is a young Trainer and one of Ash's traveling companions in the movie. His goal is to become a Pokémon Professor and he is currently on a journey gathering data on Legendary Pokémon.

He is voiced by Kanata Hongo in the Japanese version, and by David Oliver Nelson in the English version.

Prior to the events of the movie, Sorrel had moderately wealthy parents who were very busy doing work, so they had the family Luxray take care of him while they were gone. One snowy day, he had hurt himself badly by crashing into a tree. Luxray found Sorrel, and gave him warmth for the night, as he was too injured to move. As he woke up the next day, he tried to wake up Luxray, only to realize that it had frozen to death. He had extreme guilt after the incident and had trouble bonding with Pokémon until he met Lucario.

At the end of the movie, he bids farewell to Ash as he goes off to learn about the Kanto Legendary Pokémon Articuno, Moltres and Zapdos.

Sorrel enjoys reading books regarding about legends and myths. He also possesses a fair amount of knowledge about Pokémon. 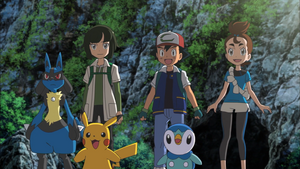 Retrieved from "https://hero.fandom.com/wiki/Sorrel?oldid=2275698"
Community content is available under CC-BY-SA unless otherwise noted.