Help her mother Bavmorda with her goals (formerly).
Stop Bavmorda for destroy the chosen child destined to bring about her downfall.
Marry Madmartigan (succeeded).

Princess Sorsha, also simply known as Sorsha, is the tritagonist in the 1988 fantasy film, Willow. She is the daughter of Queen Bavmorda and Prince Mikal Tanthalos of Tir Asleen.

She was played by Joanne Whalley.

Bavmorda, ruler comes down on her for bringing her a dead nurse maid instead of the child. Then when General Kael, Bavmorda's army commander and villain, returns after he annihilated a kingdom, Bavmorda congratulates him and then orders him to go with Sorsha to hunt the baby down and Sorsha says she doesn't need him, but Bavmorda orders her to do so. After they leave, Bavmorda is told by her evil sorcerers that reading the signs her daughter will betray her sooner or later but she says, "i trust her loyality more than i trust yours".

Later at a tavern, Sorsha and the villains look for the girl, and then discovers Madmartigan, hero and warrior, who escapes with the other heroes. Then when she and the villains seize the heroes, she asks him if he lost his skirt and he replies he still has what counts and then Sorsha says, "not for long!", and viciously attacks him. She later talks to Madmartigan, who says he would like to break her legs and she replies, "you might find that difficult slave when i' m up here and you' re down there". When he rescues the baby a little later, he talks and hangs out with Sorsha, who keeps her distance from him and is interrupted by General Kael.

Sorsha us later captured by Madmartigan and the other heroes, and she talks to him about their previous encounter and when he says, "it went away". She furiously fights him and escapes. Later, when her and villains attack the heroes, in Tir Asleen, she is fixing to fight him and yet decides to hug and kiss Madmartigan instead and turns over to the good side. She goes with the other heroes to Nockmaar, Bavmorda's kingdom and home, and confronts the dark queen, and the other villains and Bavmorda transforms her and the other heroes into pigs using her black arts.

Then later Sorsha, and the other heroes attack the villains and she goes with Willow, sorcerer and and Fin Raziel to Bavmorda's ritual chamber, where the queen insults Sorsha, and says she hates her and attacks her with her dark magic but is saved by Fin Raziel's, heroine and good sorceress, white magic. Near the end, Sorsha and Madmartigan return to Tir Asleen, and stay to raise the child together. 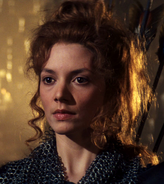 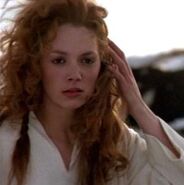 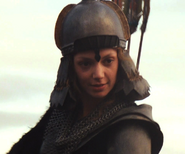