Yaguruma, while TheBee, had his own personal army of ZECT Troopers called Shadow, which had yellow stripes on their uniform, indicating that they are an elite unit of ZECT Troopers. He is a perfectionist, believing in a philosophy known as "Kanzen Chōwa" (完全調和, "Kanzen Chōwa" aka "Perfect Harmony"). When he's calm, he's a caring person who possesses a strict code of teamwork and demands perfection. He cares deeply for his team members, and in battle he is a brilliant tactician. However, he's also impulsive, brash and quick to anger. It is interesting to note that during battle he primarily uses kicks, foreshadowing his later role as Kamen Rider KickHopper.

After Tendou defeated him, Yaguruma became obsessed with revenge which caused to disregard the safety of his team which cost him TheBee Zecter and his position at Shadow. With the loss of his dignity and rank, Yaguruma went through self-loathing, seeing himself as a loser who can't keep his ideology and started a new one based on hell and darkness. However, he still shows compassion to Kageyama, allowing him to let him under his wing and putting him out of his misery after he became a Native Worm saying that they will always be partners.

When Tendou managed to infiltrate his flawless security team and upstage him by revealing how a Worm had done the same, he was so angry that he immediately challenged Kabuto to a fight. While he managed to defeat Tendou and destroy his belt, he was shocked to learn that he had been unsuccessful in his mission to eliminate Kabuto forever when Tendou transformed with a repaired belt.

His resulting hatred caused him to disregard the safety of his team in favor of getting revenge against Tendou, which led to the TheBee Zecter rejecting him in favor of Arata Kagami. After this he was reassigned to another part of the city, but returned when members of his former team were being eliminated from within by a traitor. Despite his renewed vow to protect his team, the TheBee Zecter had chosen Kageyama, making him the new leader of Shadow. Afterwards, he asked Kageyama to let him rejoin Shadow, but Kageyama turned him down. He returns in episode 33 as Kamen Rider KickHopper.

He manages to force two Executive level Worms to retreat during his first appearance due to believing that they were laughing at him. After destroying multiple Pupa Worm, Yaguruma quickly stripped Kageyama of the TheBee Zecter with a Rider Kick after telling him that he had "been to Hell" and attempted to invite Kageyama to come with him. Though Kageyama is reluctant at first, he accepts Yaguruma's offer when he saved his life, proving his partner with a Hopper Zecter of his own. With Kageyama as Punch Hopper, Yaguruma ambush Kabuto and Gatack within an abandoned factory, with the two Hoppers easily defeating Kabuto and Gatack in a matter of minutes after the two were weakened by the activation of the 'Red Shoes' system.

He and Kageyama attempt to destroy a confused and weakened Rena Mamiya during episode 40, in hopes of eliminating her early. However, he hesitates at the last moment, as if showing affection for Rena when he sees in her eyes that she has gone through the same darkness as he and Kageyama. Drake and Rena are then saved by Gon who used a fire extinguisher to distract the Hoppers. Their attempt almost works, but Rena is saved by Kamen Rider Drake. Their plan did have a side-effect, resulting in a recovery of Rena's Worm memories. When asked by Kageyama later, he says that he has indeed taken a liking to Rena, and therefore did not kill her. Even more so, Yaguruma protects Rena from Subst Worm when she is endangered. This led to an infuriated Kageyama, as it went against their beliefs of abandoning the light. Later, in his encounter with Rena and Daisuke, when Yaguruma says to Daisuke that he will protect Rena, he gets surprised when Rena, who temporarily reverted back to Uca Worm, hit him hard which sent him flying away. After that, he shows up with an injured face to a laughing Kageyama and their bond is restored.

During episode 41, Kageyama and Yaguruma fight with a depressed Tsurugi as Punch and Kick Hopper. After defeating Tsurugi, Yaguruma offers him a place as his little brother, which Tsurugi happily accepts. Yaguruma meets Tendou once more, and challenges him to a tofu cook-off, but since the seller is sold out, they would have to reschedule. The trio then encounters Reiji Nogi who makes short work of them using "Freeze" to move out of the way and cause all their Rider Finishers to collide. Continuing from the comical arc of the tofu cook-off, near the end of the episode, Tendou accidentally stood them up, and Yaguruma and Kageyama are left in the street wondering if Tendou will come and if the challenge will still commence. During episode 43, the TheBee Zecter is once again offered to him by Tadokoro, but he declares that he is enjoying his stay in the pitch black hell, as he kicks the case containing the Zecter.

Kageyama and Yaguruma watch as Reiji Nogi advances into Area Z during episode 44, and Kageyama wants to help them fight. Yaguruma laughs at him for trying to be a hero. But later after meeting with Tendou and Kagami as they prepare to face Cassis Worm, he decides to help them as Cassis Worm Gradius defeated Kageyama (who went and fought earlier as TheBee for the last time) and Gatack. Thinking that Cassis Worm laughed at Kageyama, he tells Cassisworm to laugh at him, as well. They perform a Triple Rider Kick and effectively neutralize his "Absorb" ability. Yaguruma later laughs at Kageyama for straying from the path of darkness and becoming TheBee, and so Kageyama returns to him, as Punch Hopper once again.

Yaguruma displays his desire for the darkness during episode 45, he and Kageyama binding themselves with chains and weights so that they would not be able to fight for justice. Ignoring Tendou's request for assistance, he along with Kageyama sit and meditate, attempting to regain their darkness.

Along with Kamen Rider PunchHopper, KickHopper defeats one of the two Cassis Worm Clipeus in episode 46. The two Hoppers utilize the Rider Jump function to send Cassis Worm flying into the air, destroying him with a Rider Kick and Punch as he falls to the earth. After seeing a picture of the Northern Lights, Yaguruma begins to ponder returning to the light again. Upon seeing Kageyama with a Worm identification necklace, Yaguruma scolds him for using such a device (apparently aware of its effect on human).

In episode 48, Yaguruma realizes that Kageyama has become a Native Worm and can no longer control his form. As a show of pity, he uses a Rider Kick to end Kageyama's suffering. Holding his fallen partner, Yaguruma looks up to the stars in the night sky and says that he and Kageyama will always be partners and that they have to regain the light once again. His ultimate fate was left up to the viewer as he was given an ambiguous resolution. 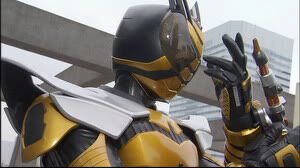 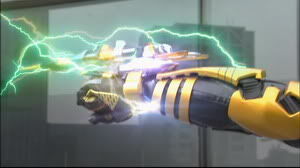 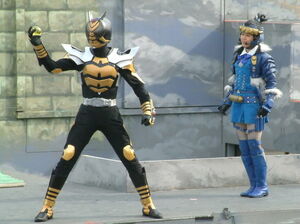