Protecting and saving humanity against Mundus and the demons by sealing them away. (succeeded)

Seal a lion's share of his power into three demonic swords (Sparda, Rebellion and Yamato) (succeeded)

Sparda was the father of Dante and Vergil, the grandfather of Nero and the posthumous overarching protagonist of the Devil May Cry franchise. He was a mighty demon who rebelled against the forces of Hell to fight for humanity.

Sparda was an extremely powerful demon, and was once one of Mundus, the lord of demon kind's, most loyal generals. At some point, Sparda grew disillusioned with his master's tyranny and cruelty, and rebelled against him, fighting for humanity. Sparda managed to defeat the hosts of Hell and even Mundus himself, whom he sealed in a marble vault. Sparda proceeded to seal off the ways between the demon and human worlds, spending the vast majority of his demonic powers in the process.

Sparda's activities after his rebellion are shrouded in mystery, though it is known that he ruled over humanity for some time before mysteriously vanishing. He would reemerge in the twentieth century, falling in love with a human woman named Eva, who bore him twin sons; Dante and Vergil.

Under the guidance of the human-turned-demon Arkham, Vergil sought to open the Temen-ni-gru, the pathway to hell that Sparda had sealed off, in order to claim Sparda's power. Dante sought to stop him, and both of them were manipulated by Arkham, who managed to claim the power for himself. Arkham was unable to contain Sparda's powers however, devolving into a mass of demonic ectoplasm, and was killed by Vergil and Dante. The two fought a final duel, with Dante winning. Dante returns to the human world, sealing away Temen-ni-gru, while Vergil refuses to go with his brother and falls deeper into the netherworld, encountering and fighting Mundus himself.

Devil May Cry: The Animated Series

Sparda's legacy in the human world lives on, with a statue of him present in the park of the town where Dante lives. It is revealed that Sparda had two apprentices, twin brothers Baul and Modeus.

The Order of the Sword, a group of demon hunters who worship Sparda as a god, begin a plot to harness demonic power for their own purposes. One of the members; Nero, is a blood descendant of Sparda, Confirmed in Devil May Cry 5 to be the son of Vergil, making him Sparda's grandson.

In his human form, Sparda was tall, handsome and blue-eyed, with a young face and slicked-back white hair. He's known to have worn a purple Victorian suit with a white cravat, a monocle over his left eye, and the Perfect Amulet (used to seal the Temen-ni-gru) around his neck.

His true demonic form is slightly insectoid, and slightly larger than an average human. He has clawed hands, an scaly hide, two downward facing ram horns, chiropteran wings hiding beetle-like wings underneath, hooves, and reptilian spines protruding from his back. His hands, arms, chest, shoulders and back were marked by golden veins, he had a red diamond eye-shaped gem on his forehead, skull-shaped golden knees, and elbow guards with small horns. His eyes were slit-like, glowed red, and did not have pupils. He is often shown wreathed in fire, though whether he was impervious to it, or summoned it, is unknown.

Not much is known about Sparda as a person. He was said to be rebellious, yet level-headed. He was honorable and very wise. He was revered and respected by many other demons for his heroism while serving Mundus, and consequently reviled as a traitor after his rebellion. Human legends speak of his courage, righteousness and justness. Sparda's human wife Eva described him as a noble fighter with courage and a righteous heart. The teachings of the Order of the Sword claim that Sparda's emotions and love was the source of his great strength.

Sparda would pass down two of his swords to his sons. Dante was given the two-handed great sword Rebellion  and Vergil was given the katana Yamato, as well as his demonic power. The two brothers would become divided over their attitude to their legacy, with Dante rejecting his demonic half and Sparda himself, and Vergil embracing his demonic half, seeking to emulate Sparda and acquire even greater power. The two sons also received one half of the amulet Sparda used to seal off the demon world each. 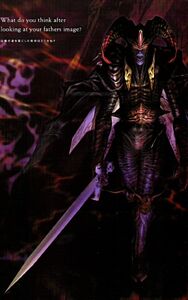 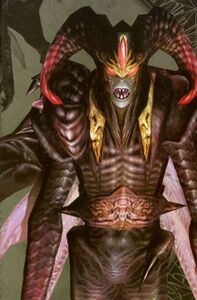 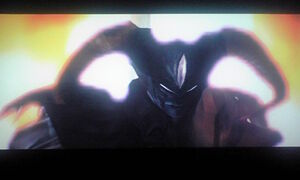 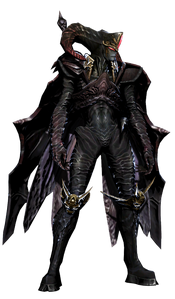 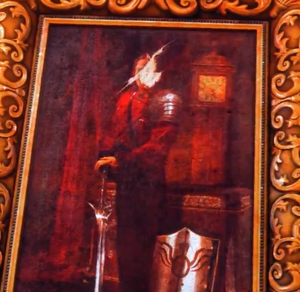 The only known image of DmC's Legendary Dark Knight