Ability to be resurrected

To save Victor from Vampire Cat

Heroic Monster
Sparky is the deuteragonist of Tim Burton's Frankenweenie. He is Victor Frankenstein's dead dog that he reanimates.

In both stories, Sparky dies, much to the dismay of his young owner, who proceeds to bring the pup back to life in his makeshift laboratory.

Sparky is a bull terrier whose sense of curiosity is matched only by his beloved owner, Victor.

Sparky is a devoted and playful whose sense of curiosity is matched only by his beloved owner, Victor. Sparky enjoys chasing after balls and being the star of Victor’s homemade movies. He exudes tons of energy and enthusiasm, which even his untimely death doesn’t diminish.

Victor's father encourages him to take up baseball and make achievements outside of science. Victor hits a home run at his first game, but Sparky, seeing Victor's hit, runs away from the bleachers to pursue the ball, and is struck by a car and killed.

Victor digs up Sparky's corpse, brings him to his makeshift laboratory in the attic, and successfully reanimates him with lightning. 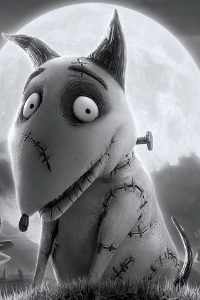 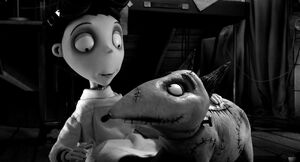