Hanging out with Ritchie

Take down Team Rocket and other bad teams.


Charizard,
Ritchie (Pokémon Trainer) and all of heroes.

Team Rocket and other bad teams.

Sparky is a electric-type mouse featured in the Pokémon franchise, he looks like Ash's Pikachu but he has a messy scruff on its head, he ressembling to Pikachu.

It was owned by Ritchie. He was seen fighting Charizard who refuses to fight, Sparky is a friendly rival of Pikachu and Ash.

He is also an ally of Pikachu, he hates the Team Rocket. Sparky is a Pokémon that ressembles Pikachu from Ash Ketchum, but he has his messy scuff on its head that looks like a hair somewhat in the anime. He always loves Ritchie and his Pokémons that have a different name than the regular ones.

He is also a bullying foil of Team Rocket and other bad teams that target him, Pikachu, Ash, Ritchie and other innocent Pokémons into a trap.

He says Pikachu and Pika pika like Ash Ketchum's Pikachu. 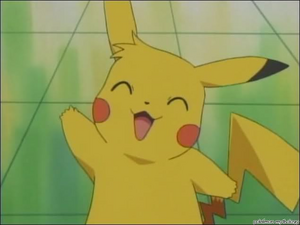 Sparky's endearing grin
Add a photo to this gallery

Retrieved from "https://hero.fandom.com/wiki/Sparky_(Pok%C3%A9mon)?oldid=1869029"
Community content is available under CC-BY-SA unless otherwise noted.