Sparx (The Legend of Spyro)

NOTE: This article is about the The Legend of Spyro hero. You may be looking for information on his original counterpart.

Help Spyro stop Malefor and save their world (succeeded).

Sparx is one of the two deuteragonists of The Legend of Spyro reboot trilogy (alongside Cynder). He is Spyro's foster brother and companion who was raised alongside him by his parents, Flash and Nina. He is also an ally of Cynder although he didn't trust her at first.

He is voiced by David Spade in A New Beginning, Billy West in The Eternal Night, and Wayne Brady in Dawn of the Dragon.

Sparx is an observant dragonfly who assists Spyro in his quest to save the world from complete destruction by the Dark Master, Malefor. He also has a comedic side as he gives off some humorous comments along the journey. Though he is paranoid in the beginning due to believing that everyone wants to kill him and Spyro, Sparx becomes braver on the course of the journey as he helps Spyro in approaching danger when necessary and even pursuing enemies. 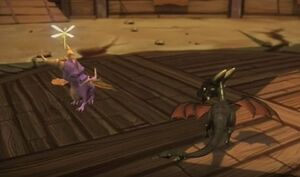 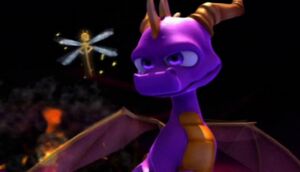