Figure out who he was.

Protect the alleys from criminals and mobs.
Get revenge on Jason Wynn for killing him.
Regain his humanity.

Spawn (real name: Albert Simmons) is the titular main protagonist of the 1997 HBO Series of the same name. He was reborn as a Hellspawn on Earth. He became known as the vigilante known as Spawn.

He was voiced by Keith David.

Albert Simmons was a high-profile CIA operative. He received fame from taking a bullet for the president.

When he worked with Jason Wynn on a secret operative mission, he was murdered by his partner at the time Jess Chapel by orders of Wynn

Returning from Hell by making a deal with Malebolgia, he finds himself dealing Hell's bidding of killing those who served the dark lord. Spawn followed his instinct and found himself killing Mafia members early upon his arrival to earth. This infuriated Mafia leader, Tony Twist. Twist called in his hitman to deal with him. In the meantime, Spawn found a mentor in Cogliostro as he learned to use his new found powers. He battled a mafia hitman Overkill putting Twist in a touch situation as he was on loan from Rome.

In his personal life, he experiences flashbacks of what his life used to be like. He watches his ex-wife, Wand Blake, fall in love with his best friend, Terry Fitzpatrick.

When Spawn overheard a police scanner report that Cyan Fitzgerald had been kidnapped, he responded and saved her from child-killer Billy Kincaid. As he walked Cyan back to the end of the alley for her to return to her mother, he handed Cyan his wedding ring. Cyan ran back to her mother, Wanda who was completely beside herself how she obtained Al's wedding ring. Cyan responded, "the sad man gave it to me. 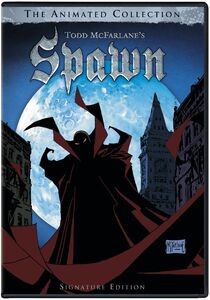 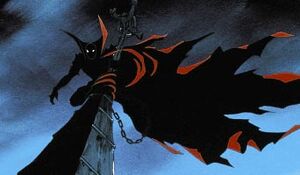 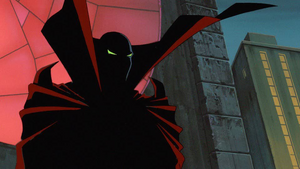 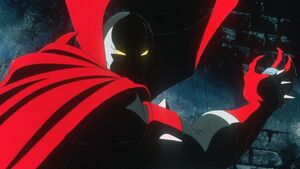 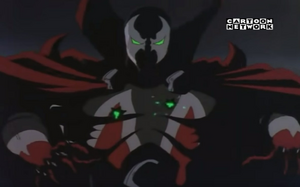 Add a photo to this gallery
Retrieved from "https://hero.fandom.com/wiki/Spawn_(HBO_Series)?oldid=2156429"
Community content is available under CC-BY-SA unless otherwise noted.