Special Tactics and Rescue Service (S.T.A.R.S.) was an elite special forces division under the jurisdiction of the Raccoon City Police Department. It employed ex-military personnel and academic civilians for appropriate positions within the police department. The overall idea was to form a team combining tactically-sound soldiers with scientists, allowing the team to operate in both anti-terrorism and increasingly-potent urban crime.

A unit of hand-picked specialists working with the Raccoon City Police Department, S.T.A.R.S. was founded in 1996 in order to combat the increasing rate of terrorism and other violent crimes. The special tactics team was formed as part of Mayor Michael Warren's redevelopment campaign, "Bright Raccoon 21", funded generously and heavily by the private sector, most notably the Umbrella Corporation. By July 1998, it was comprised of twelve members split into two teams; an "Alpha" team led by Albert Wesker, and a "Bravo" team led by Enrico Marini.

Two years after its formation, S.T.A.R.S. was deployed by the police to investigate a series of brutal cannibalistic homicides, which had taken place in the Arklay Mountains on the outskirts of the city. Bravo team was sent in on July 23, 1998 to investigate these incidents.

However, contact with Bravo team was lost and on the following day, Alpha team was dispatched to follow-up on Bravo team's mission and investigate their disappearance. Their probe of the area led to an isolated mansion (The base of Umbrella's Arklay Laboratory), where various mutated creatures run amok and the mansion's very research staff transformed into undead creatures as a result of a viral outbreak. Moreover, the members of Alpha team also found the remains of some of their Bravo team compatriots, while finding others on the brink of death (with the exception of Rebecca Chambers, who managed to escape with the Alpha team).

It was revealed that the experiments in the mansion were conducted by the international Umbrella Corporation and that the S.T.A.R.S. team's leader, Albert Wesker, was a double agent working for Umbrella, who had orchestrated the deaths of his subordinates in order to collect test battle data for Umbrella's B.O.W. research.

The team managed to thwart Wesker's plot by killing the T-002 Tyrant prototype. Only Alpha team members Jill Valentine; Chris Redfield; Barry Burton; Brad Vickers (Alpha team's helicopter pilot, who initially left the team stranded in the first place, but later regained his composure and airlifted the survivors), and Bravo team survivor Rebecca Chambers survived the mansion incident officially. Albert Wesker proved to have survived the attack from the Tyrant and escaped the mansion on his own.

The S.T.A.R.S. office had to go through a major clean out as over half of the officers were murdered (by-products of Umbrella). Their desks were cleaned out and, as such, most every member had their own desk to work at, save Rebecca who was on Bravo team so was usually on a different shift anyway.

After their return to civilization, S.T.A.R.S. requested a full-scale investigation of Umbrella's activities. However, many found their outlandish story too unbelievable to be possible and the Chief of Police, Brian Irons (who was secretly on Umbrella's payroll) disbanded the team officially, replacing the unit with the R.P.D's newly established S.W.A.T. unit to serve as the city's armed response unit. Chris, Jill, and Barry banded together and participated in anti-Umbrella operations around the globe.

S.T.A.R.S. was comprised of two different teams: Alpha and Bravo, totaling 12 members. Each team was organized based on the tactical squad formation, with five field operatives and a helicopter pilot. The teams would remain on duty for 24 hour shifts before switching to the other team, allowing S.T.A.R.S. to remain active of the event in an emergency.

The operatives were assigned to the following positions: 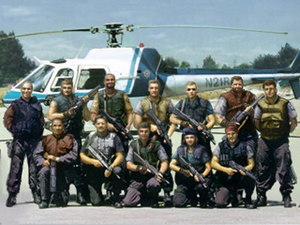 An old photograph with S.T.A.R.S. operators on it. Note that this was taken before Rebecca Chambers' joining. it is also worth noting that there are twelve members shown in the photo here, one of whom is unidentified. It is unclear who this character is.
Add a photo to this gallery

Retrieved from "https://hero.fandom.com/wiki/Special_Tactics_and_Rescue_Service?oldid=1910256"
Community content is available under CC-BY-SA unless otherwise noted.