Archer
Speedy (Roy William Harper Jr.) is the "ex-partner" to Green Arrow, and a member of Titans East. He is a reoccurring character in Teen Titans Go! who debuted in "The Date".

He is voiced by Scott Menville.

Speedy has orange hair, and wears a black and white eye mask, similar to that of Robin's. He also wears a sleeveless red shirt with an "S" symbol with what looks like a turtleneck, paired with red pants and red gloves and wears yellow boots similar to Robin's and he also wears a yellow sash and belt, presumably to hold up his matching yellow quiver. He is known to have many similarities to Robin in appearance.

Like Robin, Speedy does not have powers and is very skilled in hand-to-hand combat. Speedy is also exceptionally adept in archery, as he once was a former sidekick of archer superheroes such as Green Arrow. 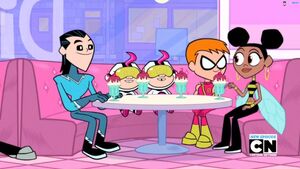 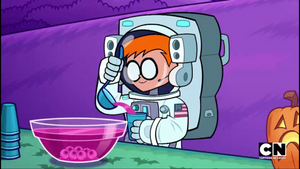 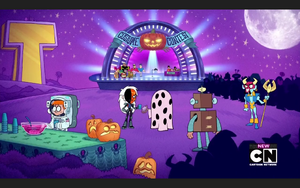