Peter's first appearance and that was before he become Spider-Man

Peter's bouncing off the walls!...Or should we say climbing on the walls?

Peter screaming comically as he tries his webbing out and swing, only to realized that he didn't knew how to land safely.

Peter vindictively allows the robber to escape with the jerkass wrestling manager's money, after said manager cheated him out of the reward money.

Peter as the photograph from the daily bugle

Green Goblin want to make a deal with Spidey by joining him which Spidey refuses.

An Alley Kiss in the rain from Mary Jane

Peter and Mj's kiss
Add a photo to this gallery

Peter realize that he lost powers

Peter gives up on being Spider-Man after losing his powers. 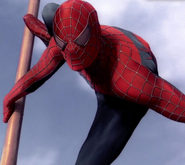 Spidey about to face Doc Ock.

Tell everyone to hold on!

Spider-Man struggles to stop the train.

Peter reveals himself to MJ.

Peter watch Mj and John after he left

Spider-Man finally got what he want: to be with Mary Jane and the hero of New York City
Add a photo to this gallery

Peter being held by Venom

Peter and Mary Jane reunited their relationship
Add a photo to this gallery
Retrieved from "https://hero.fandom.com/wiki/Spider-Man_(Spider-Man_Films)/Gallery?oldid=952706"
Community content is available under CC-BY-SA unless otherwise noted.