To do good in New York

Strong-Willed Superhero
Spider-Man, real name Peter Parker, is the titular main protagonist of The Spectacular Spider-Man cartoon. A superhero based in New York, Spider-Man faces several supervillains who are provided enhancements by the machinations of Tombstone/the Big Man of Crime, and Green Goblin/Norman Osborn, while dealing with average day issues such as Aunt May's health concerns, complications with his friends, and typical school life.

He was voiced by Josh Keaton, who is widely acclaimed for being the best portrayal of him yet. This version of Spider-Man combines elements and stories from both the mainstream comics, the 1990's cartoon, the live-action film trilogy and the Ultimate Marvel comics.

Little is known about this version of Peter Parker's early history.

But at some point, his parents Richard and Mary Parker were killed when they died in a plane crash. Orphaned as a young boy, Peter was then brought into the household to live with Richard's older brother Ben and his wife May in Forest Hills in Queens, New York. Peter grew close to Ben and May as they raised him and that they were the only family he had. both Ben and May helped him with his studies.

As Peter grew older, his bond with Ben and May became stronger. Peter became extremely bright and became a honors student at Midtown High School. Peter's shyness and scholastic interest (especially in science) often made him a social outcast, being overshadowed by the likes of high school bully, Flash Thompson. but on a fateful day on a field trip to E.S.U young Peter's life was changed forever. After being bitten on the hand by a spider genetically altered by radiation, Peter was endowed with spider-like abilities. When walking home from school Peter's spider sense warned him of danger he then realized a car running right at him he jumped out of the way and clung to a building. Peter was amazed by this and looked for other ways to test his abilities.

At some point later, Peter sews and designs a red and blue costume to conceal his identity, created web fluid that could be fired out of his wrist-mounted web shooters, and called himself Spider-Man.

Peter at first decided to use his powers irresponsibly and then asked Uncle Ben for advice. Uncle Ben then said the words, "with great power there must also come great responsibility." Peter ignored his advice and looked for ways to cash in his powers, beating Crusher Hogan in less than 2 minutes. Peter was crowned the new champion. Peter then had to sign an exclusive contract with the wrestling company (which he declined). Peter didn't get a dime.

Using his spider powers to help him get home, he then opened the door to a crying Aunt May. Peter ran over to comfort her and ask her what happened. She then tells him that Uncle Ben was shot by a burglar that broke into their house and used his car to escape. Enraged, Peter was furious at this and sought revenge, so he went after the criminal as Spider-Man, and confronted the burglar in an old warehouse. Spider-Man unmasked the robber, only to find it was the same man who he let escape earlier. After knocking the criminal out and lowering him to policeman via web line. Overcome with guilt, Peter vowed to use his powers for good and to never put himself before anyone else, remembering his uncle's words that, "With great power comes great responsibility" becoming a superhero.

After a fun summer of keeping the streets of New York safe, it was back to school for Peter Parker. He claimed everything would change. After reuniting with his friends Harry Osborn and Gwen Stacy Peter went over to ask Sally to be his girlfriend. Sally replied with a cold, "Are you damaged?" Flash walks over to Sally and then Kong comes along. Flash tells Kong that Peter was flirting with Sally. Peter tries to apologize to Kong, but Kong wasn't angry at Peter. Although Sally was angry, she said she would like to walk on a "Parker free planet". Peter was really offended by this, but chose to let it go to pursue more important things, like finding a job. Peter found a job as an intern working for Dr. Curt Connors. To his dismay, Peter was unaware that interns don't get paid.

Peter heard that the Daily Bugle would pay for pictures of Spider-Man. Knowing they needed the money, Peter tried to set himself up for perfect photos as Spider-Man stopping crime, to raise Spider-Man's popularity.

When Dr. Connors created a serum that could regenerate lost limbs using Lizard DNA, he was transformed into a terrifying Lizard-like creature. Seeing an opportunity to take pictures, Peter leaves behind Gwen and Mrs. Connors, saying he can't be late to get home. He then heads out as Spider-Man to stop Connors at the local Reptilian Zoo. A battle ensued between Spider-Man and The Lizard, and with Eddie's help, he defeated Connors and got pictures for the Daily Bugle. Natural Selection Spider-Man Spider-Man fights The Lizard in the subways. Peter was fired from his job as intern when everyone saw that he had taken pictures and lied about going home, which stressed his relationship with Eddie and the Connors.

Aunt May was having trouble paying the bills, but asked Anna Watson not to mention a thing to Peter because she didn't want him to worry. A few months later, Peter found a job, a girl, and his true life as Spider-Man. He knew that his life wasn't a fairy tale, but he knew it would have a great end. He continued fighting his foes by night as the Spectacular Spider-Man. 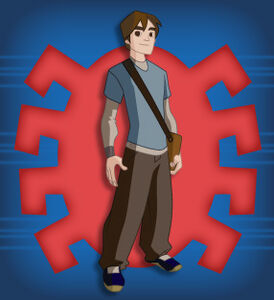 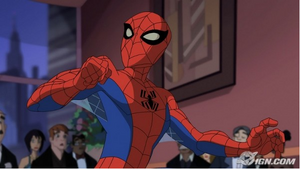 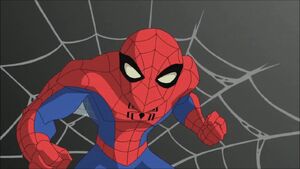 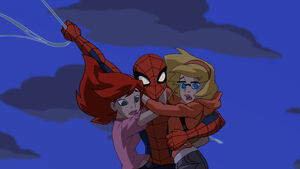 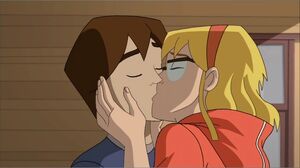 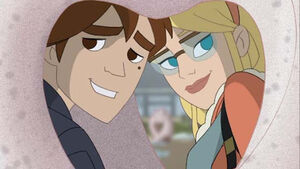 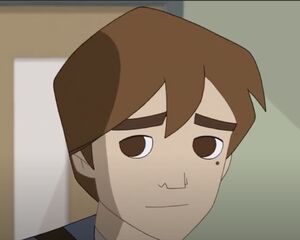 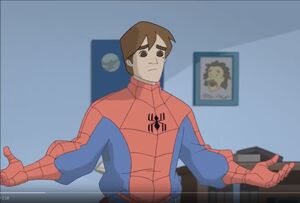