Heroes Wiki
Register
Don't have an account?
Sign In
Advertisement
in: Articles under construction, Male, Honorable,
and 36 more

Spider-Man is the superhero who has made several appearances in video games of varying quality and length throughout his career. His goals are varied, depending on which game he is in, but he regularly uses his skills to protect the world from threats.

Marvel Nemesis: Rise of the Imperfects

Spider-Man appears as a playable character in the video game Marvel Nemesis: Rise of the Imperfects.

At the streets of New York during the Imperfect invasion, Spider-Man takes down a group of invaders. After defeating Venom, Spidey takes the Turlin Neural Override off his neck, and in doing so finds flashbacks of Maya's past. The Human Torch shows up just after Spidey has left. Johnny Ohm finds Spidey in the Daily Bugle and defeats him. Spider-Man (now controlled by the Imperfects) is sent to defeat the Human Torch.

Spider-Man is found as a playable character in the Marvel Ultimate Alliance games.

When the S.H.I.E.L.D. Helicarrier UNN Alpha is attacked by a group of super-villains, called the Masters of Evil led by Doctor Doom, Thor teleports Spider-Man, along with Captain America and Wolverine onto the ship's deck. The four-fight through the Helicarrier to the Bridge, defeating Scorpion on the way. They then defeated Bullseye and Fin Fang Foom to rescue the U.N.N. Alpha. From there on out, the entire story with regard to Spider-Man is variable, as the player can choose to include or exclude him from part of all of the remaining story. Though this is true for the in-game portions, Spider-Man is often shown during the cinematics before and after missions, often adding his own comments to the conversation.

Two years after the defeat of Dr. Doom and the Masters of Evil, Nick Fury again brings the heroes together, this time for an attack on Castle Doom. Fury brings a slightly different team with him this time consisting of Spider-Man, along with Wolverine, Captain America, and Iron Man. The five-fight waves of Latverian warriors, defeating Electro, who was powering the Castle, Scorcher, Wizard, and was then sent with Wolverine to meet up with Bravo squad, and defeat the Tinkerer. Though he is again open to complete or partial inclusion or exclusion, Spider-Man can have certain moments that are specific to his character, such as conversations with Venom and Green Goblin.

As the Civil War continues, Spider-Man and the other heroes are forced to help Nick Fury in investigating the nanites that Iron Man and S.H.I.E.L.D. had been using in controlling supervillains. The heroes discover that the nanites have evolved into a large collective intelligence known as the Fold, which seeks to assimilate every life form on Earth. Nick Fury himself is assimilated, forcing Cap and Iron Man to temporarily suspend the Civil War so that all heroes can fight the Fold.

Although several major hero teams are defeated across the world, Spider-Man and his allies manage to establish a new base of operations on Wakanda. There, the heroes manage to modify a stasis code that will allow them to defeat the Fold. To do so, they must upload the code in one of the Fold's repeater towers. Spider-Man and his allies go to Iceland and manage to upload the code, neutralizing the Fold. Suddenly, the heroes are attacked by Fury, who has been injected by a new set of nanites immune to the code. After a long and fierce battle, Spider-Man and his allies defeat Fury and purge him of the nanites. With the Fold defeated, the President of the United States declares the Civil War over and pardons every hero that joined Captain America's resistance movement.

Spider-Man reappears as the major supporting character of Marvel Ultimate Alliance 3: The Black Order. He teams up with his fellow heroes to protect the world from villains and other threats.

Spider Man appears as a central playable character in the 2010 video game, Spider-Man: Shattered Dimensions. He also comes with different costumes in other dimensions.

One night, Mysterio broke into Empire State University and attempted to steal the Tablet of Order and Chaos. Spider-Man caught him in the act and during their scuffle, he accidentally broke the tablet. Madame Web appeared and explained that the tablet pieces had shattered across Earth-TRN579, Earth-TRN580, Earth-TRN581 and recruited the Spider-Men of said realities to reassemble the tablet.

Mysterio, who had a fragment, tracked down Spider-Man to Madame Web's base of operations and threatened to kill her unless he handed over the other fragments. He tried to avoid giving him the fragments, but the tablet reassembled itself in Mysterio's hands. He began to change Earth-TRN579 into his image, but Madame Web was able to teleport the other three Spider-Men to Earth-TRN579 and they defeated Mysterio.

Spider-Man is a playable character in LEGO Marvel Super Heroes.

On his way to the Daily Bugle, Spider-Man found Iron Man and the Hulk fighting the Sandman. Though he intended to take a subway, he assisted them in taking him down, retrieved the cosmic brick, and was offered a spot in the investigation, which he turned down because he was pressed on time.

He later helped Mister Fantastic and Captain America take down Doc Ock in Times Square to get back the same brick only for the Green Goblin to steal it. Spider-Man then went to Oscorp with Hawkeye and Black Widow to get the brick, but failed again. He then left the pair of spies because he was late for a date with his girlfriend.

He later went with Iron Man and Thor to Doctor Doom's submarine to fight A.I.M. and M.O.D.O.K., but the submarine sank and Jean Grey had to guide them underwater.

Spidey helped Thor and Iron Man take down Magneto. He then teamed up with Storm, Captain America, and Thing to defeat Doctor Doom.

Nick Fury had all the heroes and villains team up to stop Galactus from eating the Earth. Spidey was on a team with Thing, Green Goblin and Mystique.

Spider-Man appears in the Disney INFINITY: 2.0 Edition. He intends to protect New York City from Green Goblin and Venom's symbiote forces. He is also playable in the Marvel Battlegrounds Play Set for 3.0. A version of him in his black suit is also playable, being available as both a figure and Costume Change Power Disc. 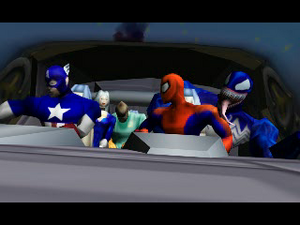 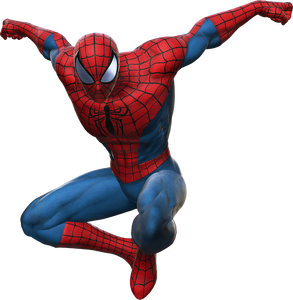 In Marvel vs. Capcom: Infinity 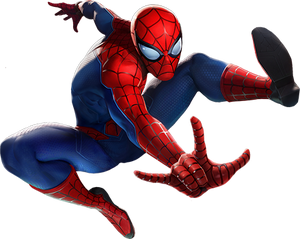