To defeat Norman Osborn and get revenge on him for killing Uncle Ben (first volume).

To defeat The crime master and Doctor Octopus (second volume).
To destroy the crime (all succeeded).

Spider-Man Noir, also known as The Spider-Man (real name Peter Parker) is a fictional character and superhero that appears in Marvel comics.

This alternate version of Spider-Man is a darker take on Spider-Man and the mythos is set in 1933 – during the Great Depression and is a part of the Marvel Noir universe. After the death of his uncle, Peter resolved to seek justice and decided to use his newfound abilities to fight against crime. Unlike the mainstream version of Peter Parker, this character uses a gun and does stick to walls but prefers to use parkour. Additionally, this iteration of the character has been a member of the Spider-Army where he met all of his mainstream counterpart, alongside their alternate counterparts.

Since his inception, the character has appeared in numerous media including the video game Spider-Man: Shattered Dimensions, as one of the main playable characters, and supporting character in Ultimate Spider-Man and Spider-Man: Into the Spider-Verse.

He was created by David Hine, Fabrice Sapolsky, and Carmine Di Giandomenico, and first appeared in Spider-Man Noir #1 in December of 2008.

This incarnation of Peter Parker was born and raised during the great depression during the 1930s, and was raised by his uncle Ben and aunt May. After finding his uncle's corpse, Peter learned that Ben was murdered by Norman Osborn due to his uncle starting a strike on sweatshops, and resolved to become a seeker of justice. Parker would become a protégé to Ben Ulrich, and was invited to act as a photographer for the Daily Bugle.

Peter received a tip off that was meant for Ulrich, and went to a warehouse where Osborn's men were loading shipments of stolen antiques. One of the antiques was a spider idol, which broke and released several spiders that bit Peter, causing him to fall unconscious and dream of the spider god. Awakening, Peter realized that he had powers, and decided to use his newfound gifts to confront Osborn at his apartment. Peter confronted Osborn, but found that Ulrich was blackmailing the businessmen to deal with his drug habit, and Parker left in disgust. Returning home, he decided to create an costume to conceal his identity, and took on the name of "Spider-Man". He then went to Ulrich's apartment to confront him, but found Ben dead, and decided to avenge his mentor's passing.

Receiving the assistance of his aunt and Felicia Hardy, Spider-Man went on to fight against Osborn's criminal operations while also still working at the Daily Bugle. When the Bugle's head, J. Jonah Jameson, kept painting Spider-Man negatively, the vigilante decided to resolve the matter and visit Jameson. He found Jameson dead, but later learned that the real Jameson had been kidnapped as the Chameleon had taken his place. Going to Jameson's location, Peter battled against the Vulture and killed him to save his aunt from the villain. He then confronted Osborn, who was keeping Jameson and Felica captive, and revealed his plot on murdering Ulrich and anyone who was a witness. Defeating the villain, Peter decided to take aunt May's words to heart on killing, and decided to let him go. Despite his good act, Osborn would be killed by Kraven the Hunter.

Peter has oversaw the injustice into the harsh environment of the Great Depression. Because of this, he took a role of the vigilante named Spider-Man Noir, taking down any criminals as soon as possible. His cynical demeanor stems from having watched his uncle getting murdered by the Green Goblins and his cohorts. Likewise, due to his painful past, Peter becomes much more willing to kill. However, despite his aggression and violent tendencies, he is still noble and ultimately wants to make New York a better place.

With his powers, Peter dons a black mask, gloves, and trench coat in order to take down Osborn in the disguise of the Spider-Man. He also brings a pistol. 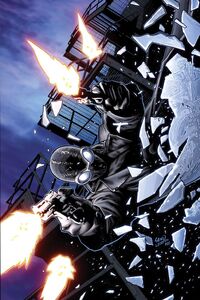 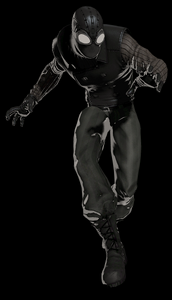 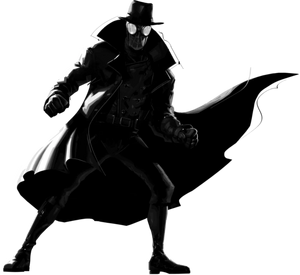 Noir Spider-Man in Spider-Man: Into the Spider-Verse. 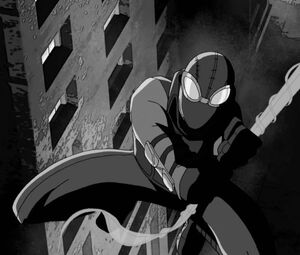