Specter
Jake (when Specter brainwashed him)

Honorable Kid
Spike (Kakeru in Japanese) is the star of Ape Escape and the first main playable character in the series.

In the begining of Ape Escape, Spike and his best friend, Jake are on their way racing towards the professor's lab. Eager to go see the professor's newest invention, the Time Machine. On their arrival, Spike and Jake see that Natalie and the Professor are tied up and the lab being ransacked by the Pipo Monkeys and their leader, Specter. Specter then orders one of his monkeys to activate the time machine, thus sending Spike, Jake, Specter, and every Pipo Monkey back in time along with two of the professor's gadgets the Time Net and the Stun Club which arrive with Spike. Spike lands in Fossil Field of The Lost Land time period where his first objective is to catch three Pipo Monkeys learking in the area. As Spike continues collecting monkeys from different time periods using the Time Station, the Professor and Natalie continually help him by inventing new gadgets for him to use on his adventure and to put and end to Specter's plan.

Spike appears in Ape Escape 2 in the final cutscene, where he visits the professor's lab after not seeing the Professor and Natalie for a while. He then welcomes Jimmy and Pipotchi after they crash their space ship into the lab.

After catching all 300 monkeys and defeating Specter both times Spike can be unlocked as a playable character by Holding L1 and pressing "New Game" at the main menu. Playing as Spike is non-canon.

In Ape Escape 3, Spike makes a small appearance. He is hypnotized by Specter's TV shows, along with the Professor, and Jimmy. After completing the game once, if the player puts in a code, the second level, Monkey Forest, will contain Spork, a monkey wearing Spike's outfit and his hairstyle.

Spike appears as a playable character in PlayStation All-Stars Battle Royale, in it, he appears in his Ape Escape: Million Monkeys form. His rival is PaRappa.

Spike is spunky and energetic 10 year old boy and is always ready and determined to get a job done. Although he has a bit of an attitude, Spike is virtuous, good-natured and kind, insisting that he would never do anything harmful or destructive. In the Ape Escape anime, Spike is shown to have genuine concern for the Piposaru in spite of their destructive and aggressive tendencies, and becomes upset at the thought of possibly having hurt one.

Spike also possesses immense will power, having been able to resist Specter's attempt at mind control through sheer strength of will alone (although it is unknown why he was unable to resist the hypnotizing TV broadcasts that later occurred in the series).

He is incredibly athletic and somewhat competitive, often besting his friend Jake in every area, leading to a mild buildup of resentment and rivalry that would later be exploited by Specter. Spike's weakness is his simple-mindedness, especially in comparison to his highly intelligent and scientific friends, Natalie and the Professor. 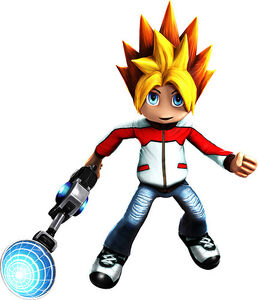