Spike is a character from My Little Pony: The Princess Promenade.

He is voiced by Brian Drummond.

He is a small blue dragon with gold-colored ear flaps and underbelly scales, a "mohawk" of pink hair, yellow claws, and short yellow spikes on his tail (which is very ticklish).

Spike is friendly and knowledgeable, speaks in a clear and cultured voice, and is seen by the ponies as a source of information and advice.

My Little Pony: The Princess Promenade

He had been in a magic sleep for a thousand years when the ponies first discovered him in a cave under Celebration Castle; his memories from before that time are rather muddled.

Spike, Pinkie Pie, Minty, Rainbow Dash and the Breezies help Rarity get home, just in time for the first rainbow of the season. 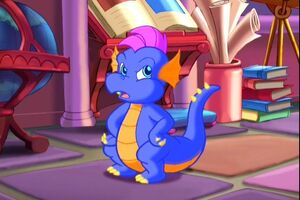 Retrieved from "https://hero.fandom.com/wiki/Spike_(MLP_Gen_3)?oldid=1712282"
Community content is available under CC-BY-SA unless otherwise noted.