Spike is a supporting character in the 2003 Dreamworks animated film Sinbad: Legend of the Seven Seas.

He was voiced by Frank Welker, who also played Scooby-Doo.

Spike is a loyal slobbery mastiff dog of Sinbad and Marina, and functions as the crew's constant companion. While his functions is largely began, he helps Marina save the crew of the ship from the deadly sirens.

At the end of the film, he interrupts Sinbad and Marina's kiss by catapulting himself into the crow's nest and slobbering all over the couple as the ship sails off into the sunset. 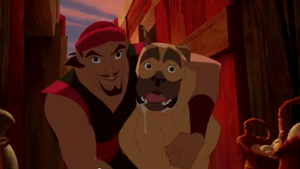 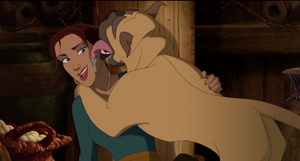 Retrieved from "https://hero.fandom.com/wiki/Spike_(Sinbad:_Legend_of_the_Seven_Seas)?oldid=1748862"
Community content is available under CC-BY-SA unless otherwise noted.