Spirit: Stallion of the Cimarron

Leader of the cimarron herd

Sly, nimble enough to jump across a canyon

To return to his herd free/Save his homeland from The United States of America (Both Succeeded).

Spirit is the titular main protagonist and narrator of the Dreamworks film Spirit: Stallion of the Cimarron.

His narration is voiced by Matt Damon, who also played Cale Tucker in Titan A.E., Max Da Costa in Elysium, Mark Watney in The Martian and Jason Bourne in the Bourne series.

Spirit: Stallion of the Cimarron

During the beginning of the film, a mare named Esperanza gives birth to Spirit; an only son. Spirit is a rambunctious, mischievous colt. He continues to grow and play, becoming more and more adventurous. He manages to get his tongue stuck to a large icicle, and befriend a whole herd of buffalo. Spirit is lovingly close to Esperanza, who watches over him as he grows older.

Spirit grows into a strong and brave mustang; becoming the leader of the Cimarron herd after his father. After an exhilarating race with the wild eagle, Spirit sees a Mountain Lion stalking two young colts. He lets out a warning call to them, and he attacks the lion before it can hurt the colts. A battle ensues, in which Spirit finally chases off the lion and is happily surrounded by his herd afterwards.

One night while watching over the herd he is attracted to a curious light that can be seen in the distance; driven by curiosity he investigates. Spirit comes across a group of men who had apparently been rounding up stallions the previous day. When he wakes them up they give chase; and Spirit almost escapes but is eventually caught.

Spirit struggles to get back to freedom when the men bring him to a cavalry post where they attempt to break him. When a Lakota Indian named "Little Creek" is captured as well, the two both manage to escape, and free the other trapped horses as well. But on the way back to his homeland, Little Creek rounds up his fellow Indians and captures Spirit once more; bringing him back to their tribe.

As Little Creek tries to ride Spirit, he also allows him to befriend his own mare, Rain. Rain would show Spirit around the camp, a rope tied around both their necks keeping him from running off. As they grow closer Spirit falls in love with Rain, and also grows closer to Little Creek. When realizing that Spirit would never be broken, Little Creek allows him to run free. Spirit joins Rain in the field and urges her to come see his own home in the west. But Rain doesn't want to leave, and before he can persuade her any more, they both hear the camp being attacked in the distance.

Running back to the camp they find that the wranglers who had captured Spirit before were attacking the tribe, and Rain runs to help Little Creek. Spirit follows her and finds that they are both about to be shot by the Colonel. They fall into the river, and Spirit jumps in to save Rain. They both go over a waterfall before he can get her out, however Little Creek was able to reach the bank in time. More wranglers find Spirit and Rain together, Rain just barely alive. They take an anguished Spirit away, and as they leave Little Creek runs to revive Rain.

Heartbroken, Spirit is loaded onto a train, and taken to another camp where he and hundreds of other horses are being forced to pull a train over the mountain, so the men can build a rail road. When Spirit realizes that they were trying to build a railroad through his home land, he stops them by creating a diversion and pretending to fall dead. When they start to take him away, he leaps back up and manages to free all the horses by kicking the chains from the front of the train. With no weight pulling it forward up the hill, the train begins to fall back, and it rolls down the mountain side. Spirit runs from it, and just barely makes it to another camp before the train crashes, causing a fire. It spreads to the forest, where Spirit is trying to run. When the chain around his neck gets stuck on a log, Little Creek appears, having followed him, and frees him. Together they jump off of a cliff and into the water.

When Spirit awakens he and Little Creek have a joyous reunion. But a group of wranglers find them, and give chase. Spirit allows Little Creek to ride him, and the wranglers chase them into the cliffs, where they manage to get rid of many of them. When they get trapped on a large cliff, Spirit slows down, and comes to a stop; staring intently at the other side of the canyon. Suddenly he sprints forward and makes his leap into freedom, practically flying over chasm. When they land safely, the Colonel gives him a nod of respect from where he had been watching from the other side of the cliff. He leads the remaining men away, leaving Spirit and Little Creek to happily celebrate their victory. Spirit gives Little Creek a ride to the tribe.

Once there, Rain and Spirit are reunited, and Little Creek tells Rain to go with Spirit; and that she would always be in his heart. Spirit and Little Creek say one final goodbye to one another before parting.

Rain and Spirit travel day and night until they finally reach Spirit's herd; where his return is greatly rejoiced by the other horses. 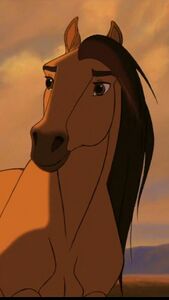 Spirit roped into the cavalry. 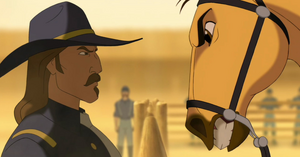 Spirit snorting at the Colonel 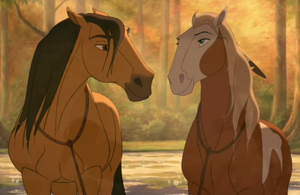 Spirit lays beside the wounded Rain.

Spirit leading his herd after the reunion.