He was voiced by Peter Renaday.

He has a strong sense of honor and follows very strict rules which all four of his students adopt.

He is a martial art instructor for the Foot Clan in Japan, and also has a passion for Renaissance art. Yoshi is framed by his rival, Oroku Saki, for trying to murder their common dojo master. Unable to prove his innocence and expelled from the Foot Clan, Splinter moves to New York City, where he lives as a hermit in its sewers and befriends the rats. One day, he comes across four baby turtles which were accidentally dropped by a boy through a sewer grate. Splinter keeps them as pets and treats them like his children. When he finds the turtles near some broken barrels that are oozing glowing pink (later retconned to green) chemical liquid, he tries to clean them with his bare hands. As a result, they are all affected by the leaking chemical, which is a mutagen. The mutagen combines the DNA of living beings who have been in contact. Thus, the turtles, being in a pet store with people touching them, turn into young humanoid turtles. Yoshi, having been in contact with sewer rats, becomes a humanoid rat.

Yoshi raises the turtles by himself, and gives them the names of his favorite Renaissance artists: Leonardo, Donatello, Raphael and Michelangelo. Yoshi is given the nickname "Splinter", due to his proficiency at breaking wooden boards, and he teaches them the art of ninjutsu in order to protect themselves.

In addition, in an episode called "The Old Switcheroo", Splinter shows a glimpse of fatherly concern for Leonardo when he is injured by one of Donatello's contraptions. Master Splinter gets the chance to be human again in the episode "Splinter No More", but realizes he prefers being with the turtles. Master Splinter always has a wise quote or speech for the turtles, and often steps in with his ninja skills when the turtles are caught in a, seemingly inescapable, predicament.

In the final episode, "Divide and Conquer", Splinter explains to the turtles after they've defeated Dregg that they're no longer his students but his equals and they have finally become ninja masters.

He and his sons are surprised when the 2003 series turtles call Splinter "father". However, in this movie, the 2003 series Leonardo comments that it feels right to be with the 1987 Splinter regardless of the differences between the two worlds. Splinter's assurances that he feels the same, coupled with his comment that Leonardo and his brothers will always be welcome there, helps Leonardo see the common similarities between the teams, regardless of their different styles and methods. 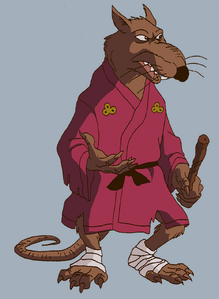