Mentor/paternal figure of the Turtles

Training the Turtles to be stronger.

Splinter is the overarching protagonist of the 2003 Teenage Mutant Ninja Turtles cartoon series. He is the adoptive father of Leonardo, Raphael, Donatello and Michelangelo. It's later revealed that he was originally the adoptive rat of Hamato Yoshi and had to wander in the sewer after the his owner was murdered by the Shredder, before finding the Turtles and adopting them.

He was voiced by Darren Dunstan.

Splinter is depicted as having gray fur instead of the brown fur of his other incarnations. Instead of a traditional Japanese weapon, he carries a cane which he can utilize as a weapon (like a Jo staff) with fierce proficiency.

Splinter was once Hamato Yoshi's pet rat, often watched his owner practicing ninjitsu and mimicked him. Yoshi was a Guardian of the Utroms, and was in love with Tang Shen, who also loved him back. However, Yoshi's comrade Yukio Mashimi was jealous of Yoshi and thus killed Tang Shen and betrayed the Utroms to the Foot Clan. Yoshi was angered by Yukio's actions and broke into the Foot Headquarters to fight his former friend, managing to kill Mashimi. He then left to New York with Splinter and the Utroms.

Sometime after, the Shredder tracked Yoshi down and interrogated him. When he refused to tell him about the Utroms, the Shredder killed him. Meanwhile, Splinter escaped, found and adopted four turtles, and the five were mutated into anthropomorphic forms by the Utroms' mutagen. Splinter then named the turtles Leonardo, Donatello, Raphael, and Michelangelo (after a book on Renaissance artists that he found in a storm drain), and trained them martial arts that he learned from Yoshi, but kept his past a secret to prevent them from trying to get revenge.

However, Splinter later reveals the truth to the Turtles when the Shredder, under his Oroku Saki persona, invites Leonardo to join him. Because of this, Leonardo refuses and the Turtles become the Shredder's archenemies. After Splinter is injured, he is taken by the Utroms and nursed back to health. When the Utroms are about to return to their homeworld, Mortu gives Splinter a crystalline ball that can be used to activate the Utroms' collective memories on Earth, including those of Yoshi. It is later revealed that the Shredder is in fact an Utrom criminal named Ch'rell, who seeks revenge on the other Utroms for capturing him centuries ago. Eventually, Ch'rell is brought to trial and exiled to the icy asteroid Mor Gal Tal, avenging Yoshi at last.

In the Ninja Tribunal arc, it's revealed that Yoshi once asked the Tribunal to help him defeating the Utrom Shredder, but they refused due to him not being the 'true Shredder' (in truth to ensure the Turtles' creation), thus Splinter blames them for Yoshi's death. After the Tengu Shredder is defeated, Splinter tearfully bids a farewell to the spirit of Yoshi before the latter disappears to the afterlife.

In "Fast Forward", Splinter is sent to the future with the Turtles. Viral blasts Splinter with a decompiler ray that scatters his bits all over the internet. While Splinter wasn't seen much in the "Back to the Sewers" season, the focus of those episodes is the Turtles' efforts to find Splinter's data bits by traveling all over cyberspace. Splinter is restored in the final episode and helps defeat the Cyber Shredder. Splinter also returns in Turtles Forever, assisting the Turtles alongside their 1987 and later also Mirage counterparts to take down the Utrom Shredder, who was revived by the 1987 Shredder and Krang, once and for all. 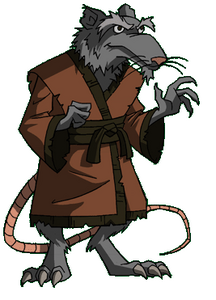 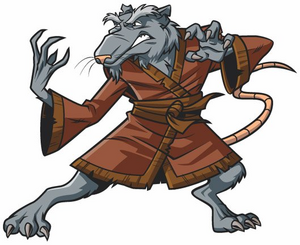 Splinter fighting without his robe. 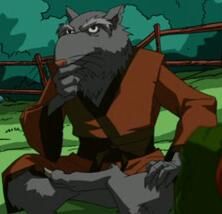 Just as Viral fires the decompiler program, Splinter sacrifices himself to protect his sons, deleting him and scattering his data bits all across cyberspace.

After the Turtles finally have collected all of Master Splinter's data-bits, Donnie uses the cyber-portal to return their master from the digital world back to the physical world. 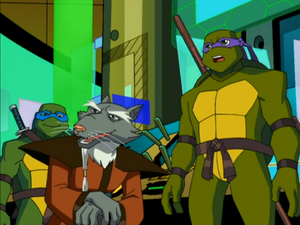