Training the Turtles to be stronger

Hamato Yoshi (aka Master Splinter) is the overarching protagonist of the 2012 version of Teenage Mutant Ninja Turtles TV series. He is both the adoptive father and sensei of all four of the Turtles. He is wise, mature, and highly trained in the art of Ninjutsu. He was voiced by Hoon Lee.

Master Splinter is the teacher and adoptive father of the Ninja Turtles. He has trained the Turtles in the art of Ninjitsu, but they are not ninja masters yet. Splinter is mature, serious, and protective. He fights with various ninja weapons and fights with many ninja skills. Any villain wishing to harm his sons will have to go through him first.

Born in 1962 in Osaka, Japan into a peacekeeping ninja clan called the Hamatos, Hamato Yoshi enrolled into a Martial Arts school before he could inherit his father's role as clan leader. His skills were only rivaled by fellow student Oroku Saki, who was Hamato's adoptive brother, originally from one of the wiped out rival clans, the Foot. Not only were they rivals in Martial Arts, but also for the love of a beautiful woman named Tang Shen, who eventually chose to marry Yoshi. Saki could not accept this and once brutally insulted Yoshi in front of her. Yoshi lost his temper and struck Saki to the ground. This attack solidified Saki's hatred for Yoshi and he vowed revenge. During this time Saki learned of his true heritage and rebuilt the Foot Clan, rechristening himself as "the Shredder". One night, he came to Yoshi's home and challenged him to duel to the death armed with razor sharp claw weapons. During the fight, a fire broke out and Yoshi's home was burned to the ground. His wife perished somewhere in the flames. He never knew the fate of his baby daughter Miwa, who Shredder secretly raised as his daughter, Karai.

Yoshi made his way to America and attempted to make a new life in New York City. One day, out of loneliness, he visited a pet store and purchased four baby turtles. Walking home, he bumped into a man and felt off about him, so he decided to follow. He came into an alley and overheard a conversation between two strange men, later shown to be members of the Kraang. His foot spooked a rat hiding in the alley, causing the villains to spot him and attempt to kill him. Yoshi fought back, but accidentally broke a canister of Mutagen they were holding in the process, spilling it all over himself and the turtles. Yoshi escaped down a sewer drain, now mutated into a humanoid rat. The turtles also mutated, gaining humanoid bodies and intelligence. Yoshi, knowing that they would be persecuted by humans, adopted these Turtles as his sons and students and has raised them in the sewers of New York ever since. He started training them in his Ninjutsu techniques because he knew that, one day, his sons would want to explore the surface, but he knew it would also be dangerous. He took on the name of Splinter and gave the turtles names of painters and sculptors from a book of Renaissance Art that he found in a storm drain.

As Hamato Yoshi: Yoshi is tall, lean and muscular, with dark brown eyes and black hair. He wears a red kimono with his clan's symbol when he lived in Japan. During the time that he resided in America, he wears a whitish blue polo shirt, along with brown pants.

As Splinter: Splinter has black, brown and white fur, with a droopy white beard, whiskers, a pink tail and a pink nose. He still wears the red kimono that he wore in Japan. Unlike all of his past incarnations, Splinter is taller than each of the Turtles.

Splinter is many things to the Turtles - A wise sensei, protective parent, loving father, stern disciplinarian, quirky master and Zen philosopher. He is determined to train and protect his new family at all costs. The fact that he has gone through decades of ninja training does not only mean that he is always fierce when he fights, but that he's also remarkably in tune with the universe.

Splinter can be very strict when it comes to training and letting his sons venture up to the surface; as seen in many episodes. At certain times, he may use harsh methods in order for them to learn a lesson, as seen in "The Pulverizer Returns!", in which he took away his sons' weapons so they could learn to fight outside of their typical environment. In "The Noxious Avenger", however, Splinter was at an unreasonable height of anger as he refused to let the Turtles defend themselves when grounding them, and worse yet, he still refused to let them off despite them fixing their mistake in the end. Nonetheless, Splinter is a loving father who only wants what is best for his sons, and will do anything that he can to protect them from harm's way.

As human, he was great powerful fighter of Ninjitsu as a master. He was training for his entire life when he was very young. He has mastered many skills and has great abilities such as great strength, acrobatics, speed, stamina, and endurance greater than any athlete. 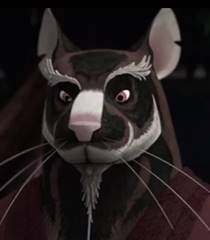 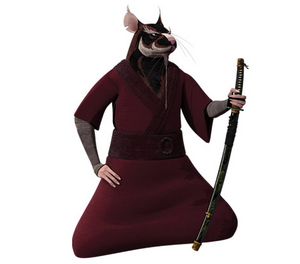 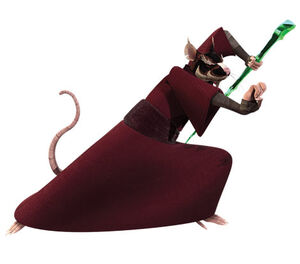