Heroes Wiki
Register
Don't have an account?
Sign In
Advertisement
in: Cleanup, Articles under construction, Big Good,
and 30 more 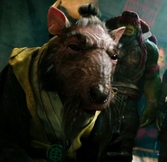 He is portrayed by Danny Woodburn and Peter D. Badalamenti and voiced by Tony Shalhoub.

Splinter was once a regular rat until he was mutated for a secret project called "Renaissance", where a mutagen was injected into his body by scientists Eric Sacks and Dr. O'Neil alongside four baby box turtles named Leonardo, Donatello, Raphael, and Michelangelo, which caused his intelligence to increase. However, when Dr. O'Neil discovered that Sacks was secretly planning to a chemical outbreak throughout New York City and use the mutagen as an antidote for the outbreak, so he could make himself look like a hero to the people of New York City, widely increase his wealth, and assist his adoptive father and master, the leader of the ninja terrorist group called the Foot Clan, the Shredder, Dr. O'Neil decided to destroy the lab and the research to stop them by causing a fire, but Dr. O'Neil was killed by Sacks for doing so. When it appeared that Splinter and the Turtles were doomed, Dr. O'Neil's daughter April, who had caring for the Splinter and the Turtles, came and rescued them. Although Splinter could not speak at the time, his intelligence was increased faster than the Turtles and he was grateful for April did for them as she released them in to the sewers for their protection.

After they were released, the full affects of the mutagen began to change them and Splinter had his size grow greatly, while the affects worked slower for the turtles, and they were all enabled to speak. As Splinter saw how Dr. O'Neil had cared for April, Splinter decided to do the same for the Turtles and began to raise them as his adoptive sons, as they lived in the sewers. But as the turtles began to more influenced the pop culture of the outside world, Splinter to world about how would be treated they decided to go to the world until he discovered a book about the art of ninjutsu, and taught himself then his sons so they would be able to fight and protect themselves, especially against the Foot Clan.