Spot is the deuteragonist of the 2015 Pixar film The Good Dinosaur.

He was voiced by Jack Bright.

He is a little human boy who lives alone and isn't afraid of anything. When he is discovered by Arlo, he is the first human ever seen by the dinosaur.

Spot first appeared in the movie as a "pest" that had eaten Arlo's family's harvest in a stockpile; Poppa assigns Arlo to capture and kill the pest. However, after trapping the boy, Arlo couldn't bring himself to kill him and set him free, disappointing Poppa. He forces Arlo to come with him and follow the boy, intending to finish the job. But a violent thunderstorm interrupts them as they decide to turn back, with the flash flood killing Poppa. Without him, Arlo is forced to help with the harvest before the first snow; the boy shows up again, and Arlo chases him in anger, blaming him for Poppa's death. But Arlo is knocked unconscious and carried downstream, miles from home.

Though hostile to the boy, Arlo and him eventually become friends, and the boy adopts the name "Spot". One night, Arlo puts up tiny twigs to represent his own family, and Spot does the same. But when Arlo buries the biggest twig to signify Poppa's death, Spot pushes both of the larger ones down, indicating that Spot had lost his parents.

Arlo keeps Spot safe from a crew of pterodactyls, who hunt for survivors of any storms as their prey, and Spot even helps the T-Rexes find the longhorn herd that were stolen by a pack of velociraptors.

During the travel back home, Spot and Arlo come across a caveman, but ignore him.

But when the pterodactyls return and kidnap Spot, Arlo comes to his rescue during another flood, with Spot angrily tearing apart Thunderclap's wing.

The same caveman from earlier shows up, with his wife and child; Arlo decides for the best that Spot have a family again than to wander the world alone, and bids him farewell. 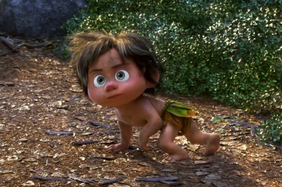 Spot gawking at the display of lights in Arlo's presence, after befriending him 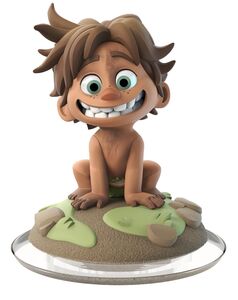 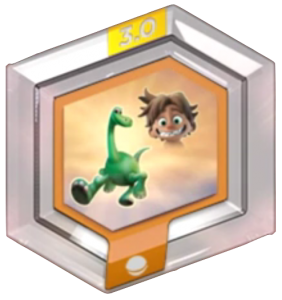 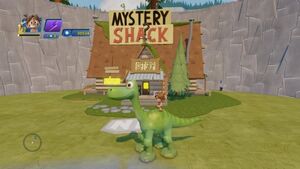 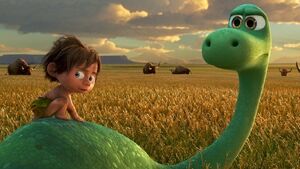 Spot riding Arlo in the movie 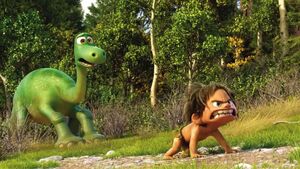 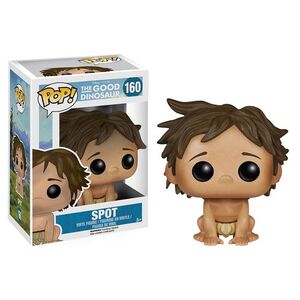