Going to school with Leonard

Staying at home with Pretty Boy and Mr. Jolly

To go to school (TV show)

To be a boy (movie; abandoned)
To accept being a normal dog

Spot Helperman is the main titular protagonist of the Disney animated TV show, Teacher's Pet and the cinematic 2004 movie with the same name. He disguises himself as a boy named Scott Leadready II and goes to school with his master and best friend, Leonard. He is a very unusual and unique dog.

He is voiced by Nathan Lane who also voiced Snowbell and Timon.

Spot is a fun-loving dog who is curious about the world around him and is a loyal friend to those around him. Spot is affectionate, confident, humorous, proud, talkative, intelligent, wise, competitive and stubborn. He often helps Leonard. He is shown to be a bit selfish at times, especially in the movie until the climax. He would risk his life for Leonard. Sometimes he is cocky.

For many of his appearances (until the end of the movie) his heart was set on being a human boy and he struggled to do dog-like things properly.

He's known for being very smart and talented, and his knowledge makes countless students jealous of him.

Spot was tired of staying home and decided to go to school to be closer to Leonard. At school, he becomes Scott Leadready II and the coolest and the first genius in class. The teacher loves him, the cool kids want him to be part of the cool kids, and Leslie, the most popular girl in Leonard's class (and his love interest) started crushing on him. All this made Leonard envious and he decided to get Scott. But, Leonard found out the truth about Scott and reluctantly agreed to let him stay as long as no one found out.

In one episode, he falls in love with a circus poodle and decides to leave Leonard, Jolly, Pretty Boy, and Mary to go be with her. But, he realizes that he cant leave his friends and family for a girl he doesn't know and changes his mind.

In another episode, he finds out that they're building a skate park where the dog park he used to play at is, so he's caught in a triangle. At the end, he decides to keep both parks and split them into different ones o different sides.

In the movie, he has won the perfect attendance medal along with some other awards. When the Principal arrives, he announces that Mary has won a trip to Florida and lends her his RV.

But, dogs aren't allowed on the RV so Spot has to stay at home with Jolly, Pretty Boy, and the pet sitter at home for the the next 2 weeks.

While watching TV, Spot sits on the remote and it changes to a daytime talk show where the host is interviewing an evil scientist named Dr. Ivan Krank who claims that can turn animals into human beings. Spot finds out its his chance to become a boy.

He finds Leonard and his mom at a gas station and has to dress up as Scott Leadready II to get her to take him along. After disguising himself as his "family", Mary decides to take Scott for the trip.

When they get to Florida, Mary heads off to go shopping while Leonard and Scott have fun at the beach. Spot/Scott tells Leonard the real reason he wanted to come, hurting Leonard in the process. Spot eventually convinces Leonard to take him to see Krank.

When they get to Krank's lab, Spot convinces Krank to make him a boy after he stops him from destroying the transformation machine. Spot is turned into a human alright but not a child as he wanted, instead hes turned into a man (which is his age in dog years).

Krank traps Leonard and Spot in a cage to imprison them and turn them into media freaks as living proof of his genius. Luckily, Ian (who is Krank's nephew) frees them in exchange for a chew toy.

But Krank finds out, and he sends his mutant minion to capture Spot.

After finding a lost dog, earning $500 dollars and spending it on cool stuff, they get back for dinner in time but forget how Scott is a man. Scott lies to Mary and tells her he's a teacher also and that he's a friend of Scott Leadready. She invites him for coffee and he goes nuts. Leonard kicks him out and his mom punishes him for the rest of the night.

That night, while Leonard is mumbling to himself, Mary starts to fall in love with Scott. Scott comes in and tells Leonard that he's gonna be his stepfather, this makes Leonard furious and he kicks Scott out of the family for good and makes him give back his collar. And Scott sadly leaves.

The next night, Pretty Boy and Jolly (who followed Spot to Florida as a subplot in the movie) arrive and Leonard tells them everything that has happened, Meanwhile, Spot is staying a cheap motel and starts to miss Leonard. Feeling bad about what he did, he decides to go back and be Leonard's dog again and realizes that he doesn't wanna be a man anymore.

As he arrives, it becomes too late and Pretty Boy and Jolly warn Spot that Leonard's gonna turn into a dog and they go out to save him.

At the lab, a battle begins between Spot and Krank's teams. Spot inserts the nickel Krank gave him earlier and he aims it at Krank, turning him into a mouse. Just as the machine is about to blow up, Spot stands in front of the zapper and it turns him into a pile of sand.

Angry and crying, Leonard kicks the machine and it reactivates and zaps Spot again turning him back to a dog.

Spot has now realized his destiny to be a dog.

When they get out of the lab, Spot still has one more problem, how are he, Jolly, and Pretty Boy gonna get home. But, he's got a plan.

That night Spot is dressed up as Scott again and convinces Mary to take him home and Jolly and Pretty Boy are hiding under the RV's bed as part of Scott's plan.

When they get back, Strickler has found out about Scott being a dog.

Spot is a small blue-furred dog of an unknown breed. He has a white muzzle and underbelly, floppy ears, a red nose and yellow eyes. There is a black spot on his back.

When he pretends to be a human student he stands on two legs. He wears round glasses, a little yellow crown, a collared yellow shirt, red slacks and gray sneakers. 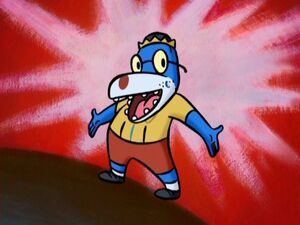 "I am Scott Leadready II!" 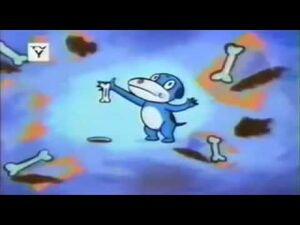 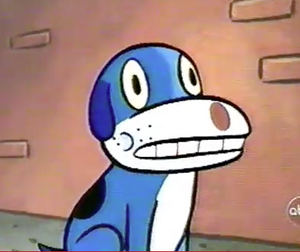 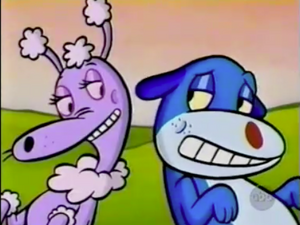 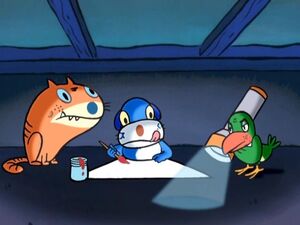 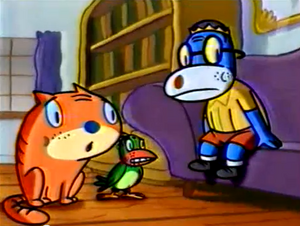 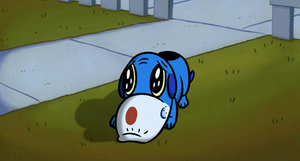 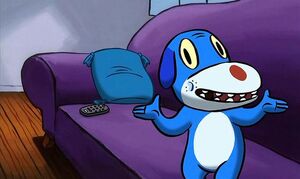 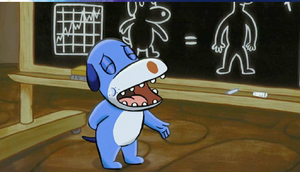 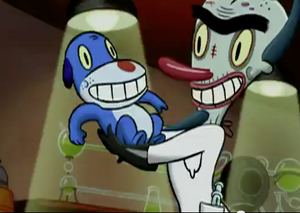 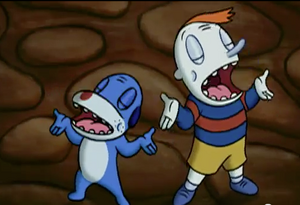 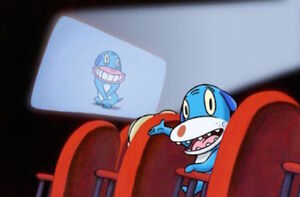 "I'm proud to be a dog!"
Add a photo to this gallery

Retrieved from "https://hero.fandom.com/wiki/Spot_Helperman?oldid=1904395"
Community content is available under CC-BY-SA unless otherwise noted.