Member of the Eternals (formerly)

Protect mankind from Deviants (succeeded).
Help Ikaris ensure the success of Tiamut's emergence so that she can be reborn as a full-sized lifeform (formerly, abandoned).
Assist the Eternals in stopping Tiamut.
Become human to experience true love (both succeeded).

Sprite is one of the five deuteragonists of the 2021 Marvel Cinematic Universe film Eternals.

She is a 12-year-old girl who is a member of the community genetically-engineered Eternals that is devoted to protecting mankind from the Deviants. Unlike the others, Sprite couldn't age and remained a child, causing her to feel envy towards humanity since she was in love with Ikaris. When the Deviants started to attack in 2023, Sprite joined the others in trying to stop them and later Tiamut from starting his emergence. When Ikaris betrayed the group, Sprite sided with him due to her love and believing that she could reborn as a grown adult, but would change sides to help Sersi stop Tiamut. Once Ikaris committed suicide by flying into the sun, Sprite decided to allow Sersi to turn her into a human so she could live a normal life.

She is portrayed by Lia McHugh.

Sprite, along with the rest of the Eternals, was created by Arishem the Judge to get rid of the Deviants, but was actually created to kill Deviants so their energies could absorbed a new Celestial on a planet. She would eventually be sent to live on Earth in 5000 BC, where she would protect humanity from the Deviants. Unlike the others, she couldn't age and she would develop feelings for fellow Eternal Ikaris. She would also use her illusions tell of her friends' exploits, which garnered them to be written as historical or mythological figures. During her life on Earth, Sprite also came across historical figures such as King Arthur and Harry Houdini, whom she presumably taught illusions.

After the Eternals went their separate ways following the Deviants' defeat in the 1500s, she would live with Kingo until he left her in Macedonia since humans noticed she couldn't age. She would then come across J.M. Burrie, becoming the inspiration for the character of Tinker Bell from Peter Pan. Sprite then lived with Ajak at her homestead in South Dakota, but would spend years with Sersi in London after noticing how both were lonely when Ikaris disappeared.

Around 2023, Sprite still lived with Sersi and became accustomed to her new boyfriend Dane Whitman, and would tell the latter of their exploits. When the Deviants attacked the three, they were saved by the arrival of Ikaris, leading to Sersi to explain the truth of their origin to Whitman. Seeing that they needed to speak with Ajak, Sprite, Sersi and Ikaris traveled to South Dakota and discovered that she was dead. Sprite mourned the loss of Ajak, and created an illusion to coup with the death, and witnessed Sersi succeed Ajak as leader when the communication sphere went to her. The group then decided to reunite the others so they could stop the Deviants from taking over the Earth, and encountered Kingo in Mumbai, and Thena and Gilgamesh in Australia.

Sersi would learn the truth of their purpose when she communicated with Arishem, and explained to the others that she wanted to oppose the Celestials and prevent the emergence. Believing that Druig could somehow put Tiamut into a sedative state, the Eternals traveled to the Amazon Rainforest to meet him at his compound. Druig initially refused since he dedicated his time helping mankind, but the compound was attacked by the Deviants, with their leader Kro successfully killing Gilgamesh and taking his powers. After Gilgamesh's funeral, Druig explained that he wasn't powerful enough to affect a Celestial, and the Eternals decided to find Phastos so he could build a device from the sphere. Going to Chicago, the Eternals reunited with Phastos, whom had started a family of his own despite abandoning humanity following the bombing of Hiroshima.

Phastos was convinced to join them by his husband, and the Eternals traveled to Iraq to find the Domo, where they reunited with Makkari. The Eternals decided to delay the emergence by forming the Uni-Mind, but Ikaris revealed that he knew of the emergence and that he indirectly caused Ajak's plans when he decided to oppose the Celestials. Sprite sided with Ikaris to her feelings towards him, but with the possibility of being rebirthed as a life-sized Eternal. Sprite and Ikaris battled their former allies until Ikaris surrendered, allowing the others to form the Uni-Mind to kill Tiamut. Ikaris would apologize for his actions and fly into the sun, and Sprite decided to allow Sersi to turn her into a human so she could experience real love. Afterward, Sprite joined Kingo and Karun Patel, but it's unknown if she was taken like Sersi, Kingo and Phastos by Arishem. 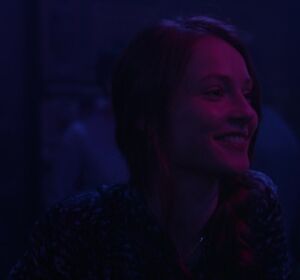 Sprite disguises herself as an adult named Sandra in order to blend in.

Sprite disguised as Ajak tries to trick Sersi about stopping the Expansion.