Sprocket is a Golding engineer in Skylanders: Giants.

She is voiced by E.G. Daily who also voiced Buttercup, Tommy Pickles, and many others.

Sprocket was raised with all the privileges of a rich, proper Golding. But she cared little for fancy things. Instead, she spent most of her time growing up in her uncle's workshop, learning how to build and fix his many mechanical inventions. But everything changed on the day her uncle mysteriously vanished. When she eventually discovered that Kaos had been behind his disappearance, she constructed a battle suit and went after him, leaving the luxury and comfort of her family's wealth behind. From that moment on, Sprocket was dedicated to fighting the forces of evil, whilst never losing hope that she would reunite with her beloved uncle. 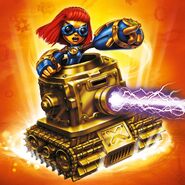 Heavy Duty Sprocket.
Add a photo to this gallery
Retrieved from "https://hero.fandom.com/wiki/Sprocket?oldid=1724089"
Community content is available under CC-BY-SA unless otherwise noted.