To win at least one leg of the race (succeeded)

To win the million dollars (failed)

Spud is a contestant on Total Drama Presents: The Ridonculous Race as a member of The Rockers team with Rock. He was voiced by Carter Hayden (who also voiced Ennui and Noah).

Spud is best friends with Rock. The two are in a garage band called "Devil Frog" together and still haven't moved out of their parents' basement apartments. Spud is good-natured, but has been described to have all the brain power and drive of a very dull sloth; he is incredibly dim-witted, and has a delayed reaction time to things like fear and panic. As a result, he is often a source of irritation for his friend Rock and a hindrance to the competition at times. However, Spud has shown that he is at least partially able to hold his own, as long as he gets the direction he needs.

Spud makes his debut in "None Down, Eighteen to Go - Part 1", with his partner and friend, Rock. According to the latter, Spud wasn't completely sure about signing up, but Rock managed to convince him. They decide to take the "Scares" in the Either/Or challenge, and, like the rest of the teams, are in for a long wait. They then take the third elevator with three other teams, and later on are seen facing trouble on the skywalk. He and Rock are one of the six teams who book themselves onto the second flight to Morocco.

In "None Down, Eighteen to Go - Part 2", Spud is first seen on the plane, eating a sandwich, and not paying much attention at what his friend is saying. When the plane lands, they are seen running to get inside a taxi, and make all the way to the spices' shop. They are later seen riding their camel, and arriving to the restaurant, where Spud takes the Botch or Watch challenge and drinks the stew. He is also seen holding his barf after Chet swallows his own puke. They finish the leg on 9th place.

In "French is an Eiffel Language", the Rockers are first seen in the airport, waiting for the second flight. They are also seen when their taxi arrives to the Eiffel Tower, and this time, it is Rock who does the Botch or Watch, and draws a caricature of Spud, that gets approved by the French artist. Spud also appears to be asleep when Rock is rowing the cheese boat, but even counting on that, they aren't eliminated and come in one of the latest places, fifteenth.

Spud doesn't do much in the next episode, but to listen to music and to bob his head up and down, being dragged by Rock almost everywhere. They get to Iceland on thirteenth place.

In "Bjorken Telephone", Spud still appears to be in his own world, while Rock is forced to do most of the challenge on his own, such as crossing the geyser field or telling an Icelandic sentence to a local. When they reach the Either/Or challenge and Spud tells Rock to do the challenge faster, Rock gets tired of him not helping, and shoves food into his mouth. They arrive on 14th place, and watch how Laurie beats up Don at the end of the episode.

In "Brazilian Pain Forest", he undertakes the bullet ant Botch or Watch, but fails to show any emotion or pain to it due to being oblivious towards his swollen hand. He finally feels the pain as he and Rock are the only remaining contestants; this allows for them to dart to the Chill Zone, where they ultimately arrive before the penalized Vegans allowing them to survive the stage.

In "A Tisket, a Casket, I'm Gonna Blow a Gasket", despite at almost always in bottom three, he cheers up Rock, only to agree what he's feeling. Spud is seen lazy eating a sandwich as his partner perform the challenge. They are placed in ninth.

Although they remain silent for the rest of "Hawaiian Honeyruin", they manage to along with the Surfers and MacArthur (except Sanders) over the donkey farting before arriving at Hawaii. Spud was seen searching for the ring underwater during the challenge, During the next part of the challenge, Spud was chosen to be the groom. Spud carried Rock on his shoulder and are place in eleventh place.

During "Hello and Dubai", they are seen applauding with the Surfers for the Adversity Twins for finishing first for the tennis challenge, they are placed in eleventh place.

Throughout "New Beijinging", his partner tried to motivated his partner, Spud to get serious in the race. Spud becomes more active during the challenge with his favorite treat that Rock bought in order to keep in order to motivate him throughout their duration of the race. However ,it backfired because Rock fixed the cart of the second challenge, he ate all of the treats, but had a sugar rush. Spud is seen pulling the cart a while Rock holds on tightly. Later they are placed in twelfth, although Don also told them if they made it they would get a penalty since Rock was supposed to pull the cart. Luckily, it was a non-elimination.

In "I Love Ridonc and Roll", Spud becomes more active than before for Rock's sake as he was able to get a taxi for them in order moving on to next destination, but he let the Goths, Haters and Cadets with them. He asked them if they can form an alliance, but he misheard them as they refused to make an alliance with them, he unknowingly reveals some of his secrets them. After succeeding the sauna challenge, Spud accepted the dare from MacArthur by kissing the baby seal, but ended up getting injured by it. The next challenge where those who didn't pull the cart back in Beijing have to do air guitaring so Spud has to do it despite his injuries. However it turns out, Spud did quite well of his performance and they are placed in first.

The following episode, Spud repeatedly forgets they're in first place. They are seen taking a selfie over the falls where he the one taking the picture, unafraid whilst his partner remained frightened. However, they are placed in ninth place; where Spud thinks that being in ninth place is good.

Throughout "Shawshank Ridonc-tion", they were the last team to break free from prison and started to move on to the next challenge. They are place in ninth.

In "Down and Outback", where they have to catch ten bunnies in order to proceed to the next challenge. However his partner end up breaking both his ankle due to step in rabbit holes unable to stand leaving only Spud to help catch it. They managed catch all ten bunnies by getting it out by a snake's stomach. In the end, it is revealed by Don that it was double elimination leaving both them and the Stepbrothers out of the race. The Stepbrothers invites them to play video games with them, which they gladly agree to.

They appear in "A Million Ways to Lose a Million Dollars", Rock was surprised they were in tthe season finale, but Spud mistakenly thinks they are finalists and hugged him, he correctly told him that they're not.

Spud looking at something.

Spud covered in a blanket. 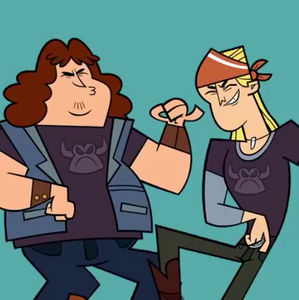 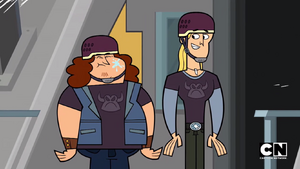 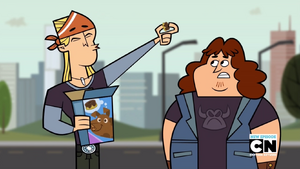 Rock explains how his strategy to make Spud collaborate will work. 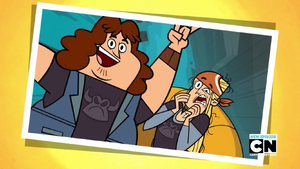 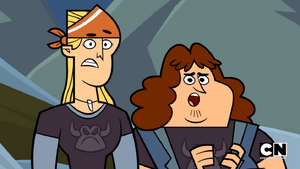 Rock and Spud are both shocked after finding out it is a double elimination leg.

Spud appears buried in the sand. 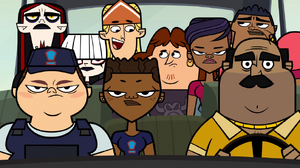 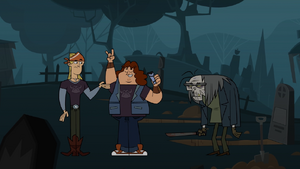 The Rockers are in the bottom four again. 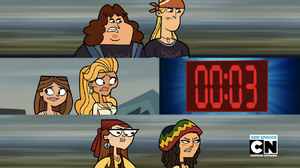 The last three teams race to the Chill Zone. 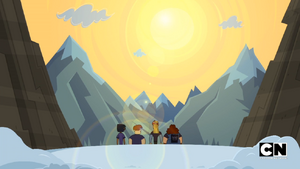 The Stepbrothers and the Rockers make their departure after the first double elimination from the race. 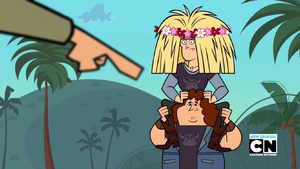 The Rockers arrive to the Chill Zone in Hawaii. 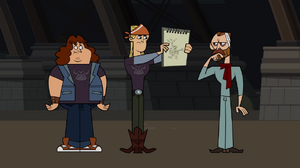 Retrieved from "https://hero.fandom.com/wiki/Spud_(Total_Drama_Presents:_The_Ridonculous_Race)?oldid=1918582"
Community content is available under CC-BY-SA unless otherwise noted.