Squawks the Parrot is a supporting protagonist in the Donkey Kong video game series. He assists the Kongs on their adventures and offers them helpful advice when faced against villains such as the Kremlings, Tikis and Snowmads.

Squawks makes his first appearance in this game, but only during one level where he carries a lantern to light the way through dark caves.

Squawks becomes a playable character who can now carry the Kongs around dangerous environments and is able to fire eggs at enemies. The Kongs can even transform into Squawks, which is required to defeat the boss King Zing.

Squawks returns again and fulfills the same role he had from the previous game except he isn't required to fight any bosses.

In this game, Squawks alerts Donkey Kong that his friends a missing and his Golden Banana Hoard has disappeared. Squawks later supplies the heroes with helpful information in certain situations and will even give them any Golden Bananas he has obtained.

Squawks can be bought from Cranky Kong's Shop for fifteen Banana Coins (or just five coins in New Mode for the 3DS version of the game) and can be used to find hidden secrets in the game. While these secrets are usually the location of Puzzle Pieces, Squawks will also help the Kongs find hidden switches in different factory-themed levels.

Squawks reappears again and reprises his role from the previous games except he only hints the location of Puzzle Pieces and is bought at Funky Kong's Fly n’ Buy shop for ten Banana Coins. Figurines of Squawks can also be purchased at the shop. 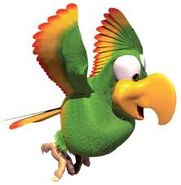 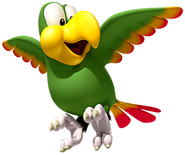 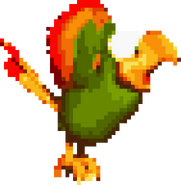 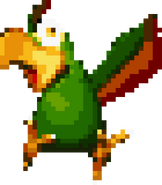 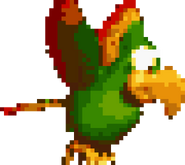 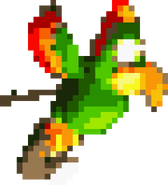 Add a photo to this gallery
Retrieved from "https://hero.fandom.com/wiki/Squawks_the_Parrot?oldid=1711901"
Community content is available under CC-BY-SA unless otherwise noted.