Stacey appears in Dead Rising 2 as the deuteragonist. She's first seen in the news on the T.V. in the locker rooms of the arena and then seen again at the security room in the safe house with Chuck and Katey. She tells Chuck where he can find Zombrex for Katey. Stacey will give Chuck messages (side missions) of the things she sees happening in Fortune City. At the beginning of the game she and Chuck get framed for the zombie outbreak in Fortune City. Chuck has to find out on what's going on. He eventually meets up with the reporter of Channel 6 Action News Rebecca Chang in the Fortune City Hotel. They head to the security room of the arena but only to find everything destroyed. Stacey contacts Chuck on the transceiver telling him Sullivan saw them on the news and is threatening to kick Katey out. Rebecca asks who that was and he says it was Stacey. She then says she'll meet her to the safe house.When he gets back to the safe house the two are arguing about the problem. Chuck then comes in into the security room and says hey. Sullivan tells him he saw on the T.V. and Chuck says he had nothing to do with the out break when Rebecca arrives Sullivan makes them a deal that if the keep bringing people to the safe and that can keep coming and going but if they die the'll have to leave it to the devil to sort them out. Later they find out Tyrone King the host of Terror is Reality framed them for the outbreak. Chuck and Rebecca end up catching him and bringing to the safe house. Then they find out Phenotrans the creator of Zombrex started the outbreak. Then Sullivan shoots Rebecca in the head and reveals he works for Phenotrans. Chuck goes and defeats him before he can escape than Tyrone King capture Stacey and Katey and defeats him two. He save Stacey and Katey then they escape Fortune City.

Stacey reappears in this what if story of Dead Rising 2 with the same role but this time she's the secondary antagonist instead of Raymond Sullivan. 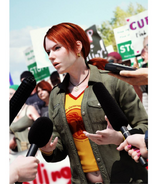