One of the YouTubers

Hanging out with the rest of the YouTubers.

Discover who the White Pumpkin really is (succeeded).

Be freed from Romeo's tyranny (succeeded).

Stampy Cat is a major protagonist in Minecraft: Story Mode, appearing in Season 1 Episode 6, A Portal to Mystery and Season 2 of the game.

He is voiced by Joseph Garrett, who also portrays himself in the YouTube Community.

StampyCat was invited with other YouTubers by Cassie Rose into her mansion, who secretly wanted to find out who had the Enchanted Flint and Steel to their world.

It is also revealed that he stole the Enchanted Flint and Steel from TheDiamondMinecart as a harmless prank, and the latter didn't know it.

A Portal to Mystery

Stampy is one of the seven supporting characters to appear later on in Cassie's Mansion. In the episode, Stampy and everyone else has to solve the mystery behind the death of TorqueDawg. when Jesse, Petra, and Stampy were down in the secret base of the White Pumpkin. There, Stampy confessed that he stole the Green Flint and Steel from TheDiamondMinecart. Jesse gives fish to the cats and they eat it. Petra tells Jesse that the cats scared her a little and said "no offense" to Stampy. He said "none taken" considering he wasn't a cat, but a person in a cat suit. Then, when Stampy and the others find out the truth about Cassie, she faked her death and went underground to another secret base. Stampy, Lizzie/Dan (whichever one you save from the spiders), and StacyPlays leave with Stampy's Flint and Steel. Stampy then says his closing line and goes with the others.

Stampy Cat later appears in this episode with Stacy Plays, and they talk wit Jesse in Beacontown. He plays a very minor role here.

Stampy appears again being frightened by the dark lord Romeo (who is also known as "the Admin") in the form of a giant Prismarine Colossus. (This is not Romeo's main body, but a separate one he made for himself.) After Romeo's Prismarine Colossus form is destroyed by Jesse, Romeo appears again in the form of a snowman, and encounters Jesse. After the encounter when Romeo summons Strays, Stampy Cat tells Jesse he and several other people will defend Beacontown with their very lives.

Eventually, Stampy and everyone in Beacontown are forced to live under the dark lord 's tyranny, with the latter disguised as Jesse. Stampy is one of the people who is caught by him and imprisoned with Lukas and tons of other people in Romeo's tower, which he has made above Beacontown. However, they break out of their cells and form an organization called the New Ocelots. After Romeo is defeated for good, the town goes back to normal (although the tower is still there, but with a few modifications). 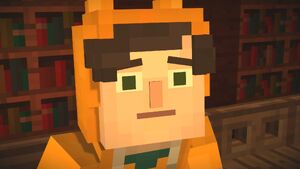 Stampy in the library.