The Author
Stan Two (By Wendy)
Sixer (By Bill Cipher and Stanley, also his superhero alias in the comic)

Discovering the secrets of Gravity Falls

Stop Bill from bringing around the end of the world (succeeded).

He is a mysterious paranormal investigator who came to Gravity Falls, Oregon, to study the huge concentration of supernatural activity in and around the town. After spending years cataloging his research in a series of journals, he disappeared into an alternate dimension after a fight with his brother, his writings the only evidence of his existence.

His identity and whereabouts were a central mystery of the series until the middle of the show's second season, when he was revealed to be Stan Pines' long-lost twin brother who vanished into an alternate universe after a falling out with his brother Stanley Pines caused him to stumble into the universe portal. He is also a main character in the final half of the second season.

Ford is a extremely intelligent man, often perceived as a rather nerdy man, as he enjoys board games such as Dungeons, Dungeons, & More Dungeons because they have high-levels of thinking to them. Ford has a rather "playful personality," he has a tremendous work ethic and serious nature, but is no less of a jokester than his brother Stanley. Despite his intelligence, it's shown he's rather naive when it comes to the modern world and technology, as he says “Greetings” to Mabel when first meeting her, and even demonstrates little to no worry in giving his great niece a crossbow. Before the incident with the portal and in the light of Bill's betrayal, it was shown that he had trust issues and was extremely careful, even bordering up the windows in his house. Ford doesn't value himself highly and often thinks of himself as less, as more then once he was willing to sacrifice his own life for the protection of others.

It was shown at least later that Ford in fact values his family highly, to the point of being willing to give Bill what he wanted if it meant the protection of Dipper, Mabel, and Stan.

Ford bears a close resemblance to Stan Pines, however, there are a few notable differences: Ford's hair, unlike Stan, is dark gray with a horizontal silver streak along the sides of it, and he possesses unusually long sideburns. His chin has a cleft and slight five o'clock shadow. He has polydactyly, with six fingers on each hand. He is taller than his twin brother, likely due to him having better posture. When he first comes out of the portal, he is seen wearing a large black coat with multiple pockets on the inside, and an item that appears to be a gun rested on his back. Underneath his coat, he wears a black shirt and pants. He also dons bulky black boots, a brown belt that slings from his shoulder, a tattered cape, and a gray scarf. In subsequent appearances, Ford is seen wearing a tan coat, a red turtleneck with a black belt that slings across his chest, black pants, and large brown boots coated in dirt. He has a gold dot on either side of his glasses and a crack on the left lens.

During their childhood, Stan and Ford were the closest of friends and would go out on adventures together. However, they got into a fight when Stan accidentally broke Ford's perpetual motion machine and ruined his chances to go to a superior college and as an extension a chance of a large fortune for the family. Due to this incident, Ford held a grudge against Stan for many years, and even after learning of Stan's efforts to rescue him from the universe portal. Ford and Stan eventually reconciled albeit strained. Ford allowed Stan to stay in the shack until summer ends whilst Ford kept the interdimensional rift contained and worked on finding a way to stop Bill Cipher's plans. He then told Stan that when summer ends, Stan is to return Ford's shack and identity. During the events of Weirdmageddon, after being trapped together, Ford came to recognize the troubles Stan went through for him and the twins reconciled with each other. After Stan sacrificed (and subsequently regained) his mind, the two decide to leave Gravity Falls to realize their childhood dream. When they are seen later on their ship, they seem to be genuinely happy.

Ford and McGucket were close friends in Backupsmore University. During Ford's time at Gravity Falls, he called his old friend Fiddleford for help in researching the mysterious paranormal activities in Gravity Falls. They researched together and eventually built the Universe Portal. When they tested the machine, McGucket accidentally got sucked into the portal causing him to see something he wanted to forget, McGucket even questioned who Ford was really working for. McGucket then cut ties with Ford, and they never saw each other again (though Ford suspected that the Blind Eye Society was McGucket's doing, and even wrote disparagingly of his desire to forget what he saw in Journal 3). Years later, during the Weirdmageddon event, McGucket chose to forgive Ford for the events leading to their falling out, finally mending their friendship.

Bill Cipher is Ford's greatest enemy, as Bill tricked Ford into building the Universe Portal. Ford attempted to warn people who read his journal about Bill Cipher's existence and the dangers he could do to their world. During Ford's time doing research at Gravity Falls, he hit a roadblock and he summoned Bill to assist him. He considered Bill a friend due to the amount of help and knowledge that Bill shared with Ford. However, when Fiddleford McGucket was sucked into the Universe Portal, Ford realized Bill's true goal and stopped him by deactivating the portal. Ford's current mission is stopping Bill Cipher from getting his hands on the interdimensional rift and goes to great lengths in doing so (to the point where he would Bill-proof the Mystery Shack). Unfortunately, the rift has fallen into Bill's hands, therefore creating a gateway from the Nightmare realm to Earth.

Ford is an idol to Dipper as he was always obsessed with the Author of the Journals. When Dipper obtained Journal 3, one of his main missions was to learn the mysteries of the town and to find out who the Author was. When he finally meets the Author, Dipper becomes extremely excited and Ford becomes flattered that Dipper was a fan of him. With eagerness Dipper wishes to assist him yet, Ford was initially reluctant to allow Dipper to help him at all because he is a child and he didn't want Dipper to be in danger. However during their game of Dungeons, Dungeons and More Dungeons, their common interests and enjoying the same things further strengthens their bond. Ford thinks of Dipper not only as his great nephew but a friend, Ford then decided to trust Dipper with the knowledge of a dimensional rift he sealed away, swearing Dipper to secrecy. Despite their close relation, Ford still kept secrets from Dipper about Bill Cipher, but he finally tells Dipper the truth in "The Last Mabelcorn," as he didn't want Dipper to distrust him. Due to this, he tells Dipper that no more secrets should be kept between them. In "Dipper and Mabel vs. the Future," Ford invites him to stay in Gravity Falls with him to study all the supernatural occurrences since he's getting old. Dipper accepts the offer initially, but later reconsiders.

When meeting Mabel for the first time, he was surprised but endeared, particularly by her description of his six-fingered handshake as "a full finger friendlier than normal."

Ford hasn't interacted with Mabel as much as he has with Dipper, however, they are seen to be in good terms with each other. Mabel (along with Stan and Grenda) rescued Ford and Dipper from Probabilitor the Annoying despite Stan and Grenda's reluctance to do so. When Ford called for a family meeting, he allowed Mabel to find a lock of unicorn hair with which to protect the shack from Bill Cipher. Despite Ford's belief that Mabel won't be able to succeed, Mabel returns with the required item, shocking Ford. In return, Ford assures Mabel that she has a good heart.

Ford once found its egg while digging. He calls it Experiment 210 and later considers the being to be too dangerous. He then locks it up in a cryogenic tube. 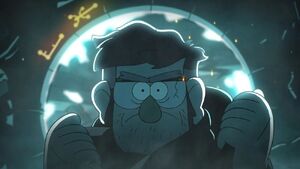 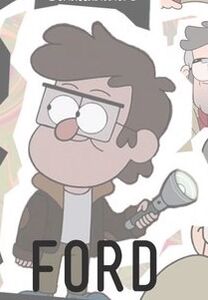 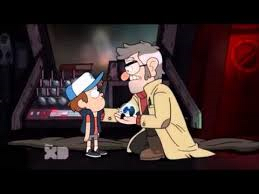 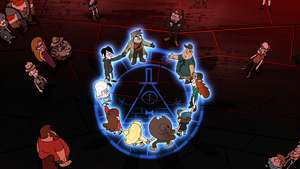 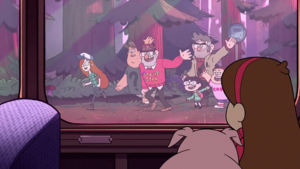 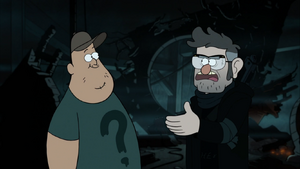