Stanley (A Troll in Central Park)

A Troll in Central Park

Making grow up flowers
Playing with Gus and Rosie

Gentle troll
Stanley is the main protagonist of Don Bluth's 7th animated feature A Troll in Central Park. He is a good-natured troll who literally has a green thumb which can grow flowers, something he, unlike any other troll, loves.

He was voiced by the late Dom DeLuise, who also played Jeremy in The Secret of NIMH duology, Tiger in the An American Tail franchise, Fagin in Disney's Oliver & Company, and Itchy Itchiford in the All Dogs Go to Heaven franchise.

He is a lover of all Nature, and good and honest things, but others don't see that, He has been given a great gift, a green thumb that can grow plants, and do all sorts of magic, he has been in fear of the queen for years, but gain the courage from his friends and from his beliefs. 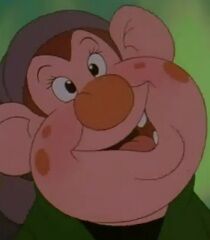