Stealing valuable artifacts and using them to benefit the poor.

Steal from the wicked to give to the less fortunate.

Convince Thanos to not wipe out half of the universe.
Steal the Embers of Genesis from the Collector.
Stop Infinity Ultron (all succeeded).

He is an variant of T'Challa who was abducted by Ravagers instead of Peter Quill at a young age. He grew up with the Ravagers, gaining the name Star-Lord, teaching them to change their way of life and help the galaxy. Wanting to help those who are less fortunate, T'Challa would go on to steal the Embers of Genesis from the Collector to feed people from different planets.

Like his original version, he is voiced by the late Chadwick Boseman, as Maddix Robinson voiced the character young.

Prince T'Challa complained to his father, King T'Chaka, about the seclusion of Wakanda. Though he understood his child's desire to explore, T'Chaka urged him to stay in Wakanda where he would be safe. As T'Challa wandered outside the barrier wall, he was abducted by the Ravagers, on their last assignment to recover the offspring of Ego. Yondu scolded Kraglin and Taserface for abducting the wrong kid, but was surprised by T'Challa's interest in exploration. He happily joined the group and they continued their adventures for the next twenty years.

What If... T'Challa Became a Star-Lord?

On Morag, T'Challa known as Star-Lord entered the chamber holding the Power Stone. After retrieving it, he was intercepted by Korath, on orders from Ronan. Korath was a big fan of Star-Lord but still fought him in an attempt to recover the Power Stone for Ronan. Although he lost, T'Challa still took Korath with him. Yondu arrived to help T'Challa deal with the Sakaraans. The Ravagers left the planet.

In a bar, the Ravagers share a drink and discuss T’Challa’s greatest jobs. At one point, Thanos appears and admits that T’Challa convinced him to end his quest for Infinity Stones. T’Challa encounters Drax as a bartender, who praises him for stopping Ronan’s Kree invasion that would have killed his family. He also sees Nebula, with shoulder-length blonde hair. Nebula talks to T’Challa about the Power Stone, asking if Thanos, her father, knows he has it. She also remarks about his necklace. T’Challa tells her that Yondu tried to bring him back to Wakanda once, but found that it had been destroyed by another war. Nebula tells him of a job to recover the Embers of Genesis, which can terraform a planet in minutes. T’Challa sees it as an opportunity. The Collector is the mark, but has become much more powerful in this universe as Thanos is not seeking domination. Yondu disagrees with the job, but T’Challa manages to convince him.

The Ravagers go over the plan to pose as sellers on Knowhere to get past the Black Order by causing a distraction. Nebula and Yondu meet the Collector while T’Challa looks for the Embers. He sees several prisoners including Cosmo the Space Dog. He frees Howard the Duck in an effort to find the Embers. Outside, Proxima Midnight confronts the Ravagers and realizes that it’s a diversion. She sounds the alarm as Howard is enjoying a drink during happy hour at the bar. T’challa runs when he hears the alarm and comes to a room housing a Wakandan spacecraft. It has a video of his father pleading for the return of his son. Before he can think about it, he is taken by Nebula and imprisoned with Yondu and the rest.

T’Challa confronts Yondu on lying to him about Wakanda being destroyed. Yondu tells him that the Ravagers are his family, but T’Challa tells them they are not. Corvus Glaive arrives to take T’Challa to The Collector. In a glass cell, Tivan and T’Challa chat before Tivan gives the order to Ebony Maw to dissect T’Challa. Nebula shoots Corvus to reveal that their distraction plan worked, and she recovered the Embers. T’Challa breaks free of the cage, and is saved by Tivan’s servant before Ebony Maw can kill him. T’Challa and Tivan fight, but T’Challa is no match for his collection of weapons, which include Captain America's Shield, Mjölnir and Hela's Helmet

The Ravagers run from the Black Order as Thanos decides to engage them. He fights Cull Obsidian, but Cull gets an assist from Proxima. Yondu arrives to help T’Challa fight Tivan, who swiftly breaks his arrow. Cull and Proxima beat Thanos, but Nebula saves them by throwing some Ember seeds into Cull’s mouth, starting the terraforming of Knowhere. She brings Thanos onto the Ravager ship and orders to take off. Inside, Yondu and T'Challa are able to beat Tivan by knocking him into his own cell. They give control to Carina, who frees all of his prisoners before opening his cell. T’Challa and Yondu leave with Cosmo the Space Dog on the Wakandan ship as Knowhere terraforms. T’Challa and Yondu discuss his desire to explore, and T’Challa decides to return them to Wakanda, where he reunites with his parents. He introduces the Ravagers as his family made along the way.

What If... The Watcher Broke His Oath?

T'Challa would learn that Ego had arrived to Earth to take his son Peter Quill for his expansion, saving Quill and taking him away from his father. After saving Peter, T'Challa was chosen by Uatu the Watcher, who proceeded to take him to a dimensional bar that Strange Supreme created. T'Challa was informed by the Watcher that he chose him, Captain Carter, Strange Supreme, Party Thor, and Gamora to stop Infinity Ultron from destroying the multiverse. Uatu then formed the group as the Guardians of the Multiverse before transporting them to an unnamed planet, and the team made a toast. While celebrating the formation of the team, Party Thor accidently alerted Ultron, and battled the Guardians.

During the battle, T'Challa managed to steal the soul stone from Infinity Ultron, allowing Strange Supreme to transport his teammates to Ultron's universe. The Guardians encountered Black Widow, the only survivor of Ultron's rampage, and Captain Carter managed to persuade Widow to joining them in stopping the artificial intelligence. Continuing the conflict, Gamora would use the Infinity Crusher, but realized too late that the stones are different from her universe, thus they can't be destroyed. Before the team could be killed by Ultron, Black Widow managed to transfer Arnim Zola's conscious into Ultron's body, thus deleting the artificial intelligence. Upon their victory, Killmonger betrayed the group and obtained the infinity stones, but was locked in a standstill by Zola, which allowed Strange Supreme to trap the two into a pocket dimension. After stopping Infinity Ultron, the Watcher returned the Guardians to their respected realities, where T'Challa started to teach Quill how to use a quad blaster.

T'Challa wears an alternate version of Peter Quill's Star-Lord costume from the sacred timeline, having a purple design instead on his jacket and eyes on his helmet.

T'Challa is very similar to his sacred timeline counterpart, being a compassionate and selfless person who has spent his entire life helping others across the galaxy. His heroism has inspired the hearts of many, as he was able to change Thanos from wiping out half of the universe, which allowed the titan to become a hero. 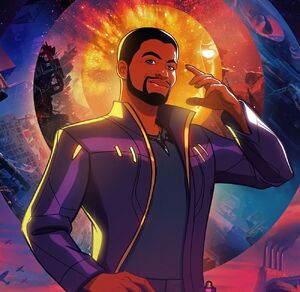 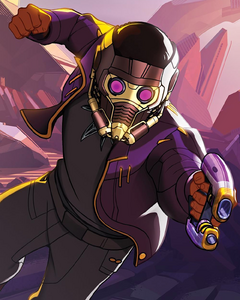