Starfire is a superheroine from DC Comics who is most famous as a member of the Teen Titans and was one of the main heroes in the 2003 animated series of the same name.

Koriand'r is a princess of an alien race known as the Tamarans. After her kingdom was overthrown, Koriand'r escaped to Earth and found herslf among the Teen Titans. Using her ability to absorb knowledge through her lips, Koriand'r kissed Dick Grayson and acquired the ability to speak English.

Starfire and Nightwing had strong feelings for each other during their adolescence. At one point, they were engaged to be married, but their wedding was cut short when Raven went rogue and fought her fellow Titans. The two realized this was a wake-up call and that they weren't right for each other. Even though they split up, it's implied Koriand'r still has feelings for Nightwing.

Donna was Koriand'r's first real friend. When Donna became a photographer, Koriand'r often modelled for her. The two have even been bridesmaids at each other's weddings.

When Starfire, Animal Man and Adam Strange were stranded in space, the three developed a firm friendship. After arriving home, Starfire found her energy depleted, so Buddy allowed her to stay with him and his family. During this time, his wife Ellen suspected that the two might have romantic feelings for each other, which Starfire calmly denied.

In an alternate future, however, Buddy and Koriand'r shared a kiss when he sank into a depression. The two immediately realised what they were doing and kept their distance from then on.

After the continuity-changing events of Flashpoint, Starfire fell in with the Red Hood and Arsenal and the trio formed a group known as The Outlaws. Starfire shares a ongoing sexual relationship with Roy. While Roy believed she was in a relationship with Jason it was later confirmed that things never went that far as Jason was "the first person I've only known as a friend." (Red Hood and the Outlaws #17)  Although her relationship with Roy seems unromantic the two have started dating. The three work effectively as a team.

Tamaranean Physiology: Starfire's alien physiology constantly showing her capabilities when angered or when one of her friends are in danger. Starfire's abilities and powers are directly controlled by her emotional state; to use them she must consciously access a given emotion.

Advanced Hand-to-Hand Combat: Starfire displayed some great fighting skills. Even when hand cuffed, she could hold her own against a handful of Gordanians and even the Titans when she first came to Earth. 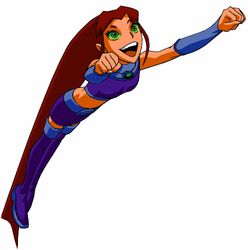 Starfire as she appears in Teen Titans 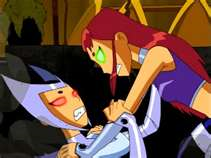 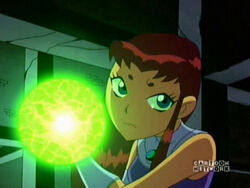 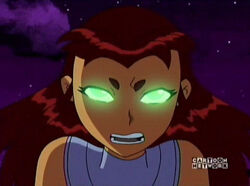 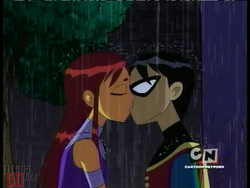 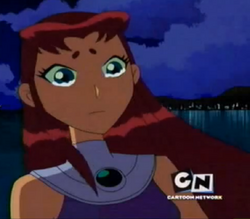 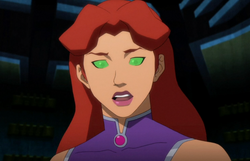 Starfire in the animated film Justice League vs. Teen Titans 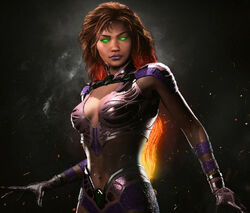 Starfire in the Titans TV Show

Starfire as she appears in Teen Titans Go! 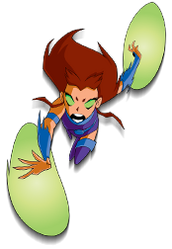 Starfire kisses Robin on the cheek

Robin and Starfire about to kiss 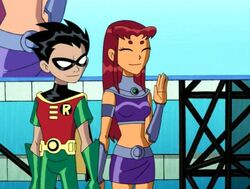 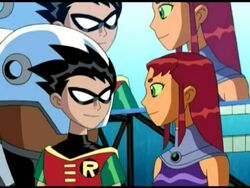 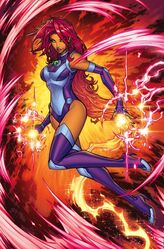 Starfire as she appears in the comics 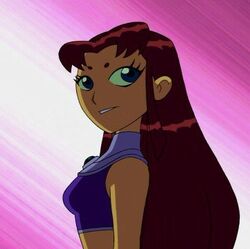 Starfire's Titans poster
Add a photo to this gallery

Retrieved from "https://hero.fandom.com/wiki/Starfire_(DC)?oldid=1226403"
Community content is available under CC-BY-SA unless otherwise noted.