Starfire is a Teen Titan and appears in the Year Three Annual of the Injustice: Gods Among Us Comic, and as a DLC playable character in Injustice 2.

She was voiced by Kari Wahlgren, who also Nova, Charmcaster, Elika, Mina Monroe, and Kitana.

Formerly warrior Princess Koriand'r of the now-destroyed planet Tamaran, Starfire found a new home on Earth and a new family in the Teen Titans. She was once romantically involved with Dick Grayson, and often dealt with hostilities from her older sister Blackfire. Starfire has also served with many other teams such as the Outsiders, Justice League, R.E.B.E.L.S. and Jason Todd's Outlaws.

Starfire is a wielder of magic cosmic powers that allow her to be extremely mobile with a wide range of projectile attacks. Her character power fires off her signature Starbolt beams, which attack from a distance to extend her combos. 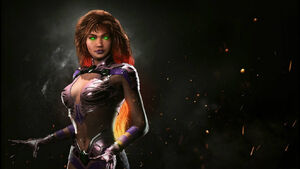 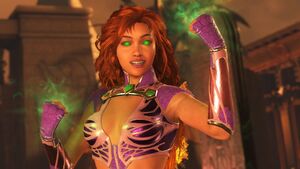