Join the Seven to protect others.

Stand against the Seven's male members.

Starlight (real name Rebecca Anne "Annie" January) is the tritagonist of the 2006 highly controversial adult comic-book The Boys. She also appears in The Boys: Dear Becky, as a major character.

She is a member of The Seven and former member of the conservative religious superhero team the Young Americans. She is friends with Wee Hughie although neither realizes what the other's "day job" is.

In the comic series, she is known by her superhero alias, Starlight. She has the ability to emit blinding light from her hands and also the ability to fly. Annie was born with her abilities and accidentally permanently blinded her parents and the doctors present upon birth. Faced with an increased cost of living due to their disability, her parents were forced to give up custody of Annie to Vought. She was raised by foster parents and attended several superhero pageants as a child.

She received no real love from her foster parents, however, as they viewed her as a show pony more than anything else, and were only caring as long as she preformed well in the pageants. She joined the Seven after the death of previous member Lamplighter, leaving her previous superhero group Young Americans. She is quickly rattled after finding that her membership to The Seven comes at a high price—sexual activity with the male members. Similarly to the show, Starlight is coerced into performing oral sex on Homelander, Black Noir, and A-Train. She continues to be mistreated but gradually learns to stand up for herself, particularly in her interactions with A-Train. This culminates in Starlight temporarily blinding him when he attempts to rape her.

Shortly after joining The Seven, Starlight enters into a relationship with Hughie Campbell, although neither are aware of the other's real profession. When Annie finally confesses to being a superhero, Hughie is shocked and hurt. He considers resuming the relationship but is further hurt when he is manipulated by Butcher into watching Starlight perform oral sex on members of The Seven. Without knowing the full context of what he just witnessed, Hughie is furious and breaks up with Annie after insulting her. 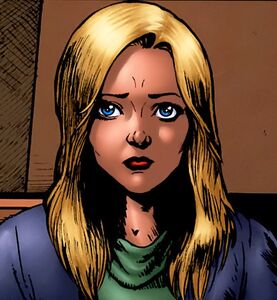 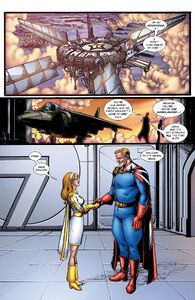 Annie is welcomed to the Seven by Homelander.

Annie at a meeting with the Seven, being eyed by A-Train. 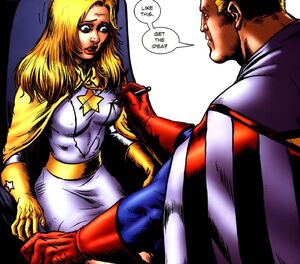 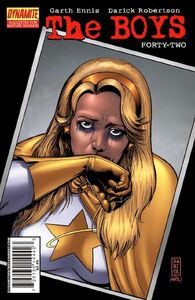 Starlight on a cover, after being forced by Homelander, Black Noir and A-Train.