Spirit of the stars

Magic Sprite
Starlow is a major character in the Mario & Luigi series since Mario & Luigi: Bowser Inside Story. She is a spirit of the stars, who originally came to counter Rouliboulite but will come back to help Mario and Luigi in all their future adventures.

Starlow makes her debut in the game, where she is summoned by Princess Peach to discover a cure for the Blorbs, a disease that has been causing many of the creatures throughout the land to swell into balls. However, she does not know what the cure is, which causes a fight to disperse between her and Toadsworth.

Eventually, Bowser arrives shortly after the Mario Bros. do and is beaten by his long term nemesis. He then returns after eating a Vacuum Mushroom and inhales everyone on sight, which includes her, the Mario Bros, Peach and more.

After being rescued by Mario, she accompanies him and Luigi throughout the journey by stowing in the former's pocket (as revealed in Paper Jam). She fulfills the same role in the remake.

She reappears in Dream Team where she meets the others at Pi'llo Castle on Pi'llo island, invited just like them. Eventually, Peach gets pulled into Luigi's dream after sleeping on a "pillow" and gets kidnapped by the villain of the game, Antasma. Shortly afterwards, Mario and Dream Luigi free the Pi'llo the real Luigi slept on, who goes by the name of Dreambert. She then accompanies Mario and Luigi again along with Dreambert to save Peach and stop Antasma, and later Bowser.

Starlow makes her third appearance in Paper Jam, again teaming with Mario, Luigi and this time Paper Mario, to gather up all the paper beings that were released from a book holding another world within it, as well as having to stop two Bowsers.

Starlow appears in the remake of the first game, unlike the original, only this time she has a much smaller role and does not tag along with Mario and Luigi, or even interact with them. She appears in the Bowser's Minions side of the story, where she is "rescued" by Captain Goomba and his allies from Hermie. She then enters the cute contest and wins, albeit by a forfeit from Captain Goomba. She can later be unlocked as a minion to fight with after defeating Fawful the first time. This has so far been the only game where she does not travel with the Mario Bros.

Starlow appears in Super Smash Bros. Ultimate as a advanced Support Spirit that increases the user's attack power if the user hasn't taken any damage. Her spirit battle is on the battlefield form of the Brinstar stage against Pac-Man, Mario and Luigi that starts giant-sized but becomes tiny after a little while.

Starlow is capable of flying and floating in the air at will. She has considerable superhuman strength, being able to lift Mario and Luigi easily and hold herself at a ledge with several people clinging to her, the most impressive being that she does it with her teeth.

Starlow can summon a breath of wind, and by combining their powers with Peach can use abilities like telekinesis and an energy ray. 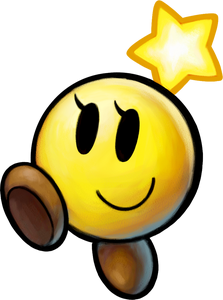 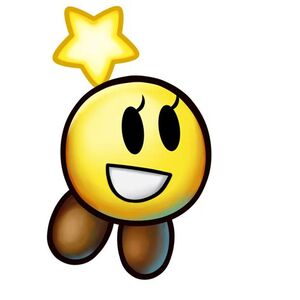 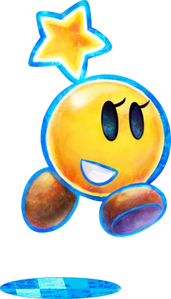 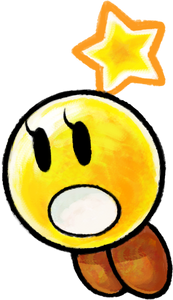 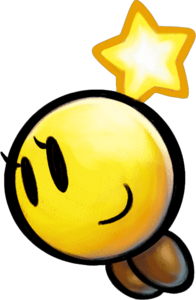