Steel are a superhero from the DC comics and universe. Hank Heywood is a name passed down through several generations of heroes.

The original Hank Heywood was crippled during World War II, and a scientist used cybernetic upgrades to make him extremely powerful. He took the name Commander Steel, originally just Steel, and became a member of the All-Star Squadron. His grandson Hank Heywood III also had to be rebuilt after an injury, and he became the second Steel working with Justice League Detroit. Heywood's other grandson Nathan became Citizen Steel as a member of the Justice Society. There is another superhero named Hank Heywood on Earth 2 in the New 52 reboot continuity. Hank Heywood, Jr. is repaired by his father and becomes Captain Steel of the World Army.

Henry "Hank" Heywood III is the son of Hank Heywood, Jr. and an unnamed mother, and the grandson of Henry Heywood, Sr., who was the vigilante and war hero "Commander Steel". By the time he was two months old, his father was killed in Vietnam, and his mother died of breast cancer a year later. Parentless, Heywood III was raised by his grandfather and his father's best friend, Dale Gunn through his teenage years.

In the "Crisis on Infinite Earths" storyline, Steel and Vibe battled Lex Luthor and Brainiac's team, and the former was transported to another location by Warp when Vibe came to his aid. When Heywood Sr. demanded that Hank leave the Justice League, he refused and Heywood Sr. evicted the team from the Bunker. Afterward, the supervillain Professor Ivo sent his androids to kill the Justice League, and Vibe was killed during the event. Angered by the death of his friend, Steel pursued Professor Ivo, but was wounded by one of the villain's androids. He was placed on life support, but was killed by Despero, who wanted revenge on all of the Justice League in Detroit.

Henry "Hank" Heywood, Sr. was injured of saboteurs while serving in the United States Marine Corps, but was saved by Doctor Gilbert Giles who gave him a cybernetic frame. Heywood would then go on to continue to fight in World War II under the moniker "Steel", but later gained the title of "Commander Steel" by Franklin D. Roosevelt. He was a member of the All-Star Squadron, the Justice League of America, the Justice Society International, and the Shadow Fighters.

The grandson of Commander Steel and cousin of Hank Heywood III, Nathan was a retired football player by the time he was given his powers. Nathan was given his alloy by Reichsmark's metal blood, which absorbed into his skin and superhuman durability and immunity to pain. Seeing his potential to be a hero like his grandfather and cousin, Nathan took on the moniker of "Citizen Steel" and became a member of the Justice Society of America.

Main article: Captain Steel Born on Earth-2 with a rare birth defect that would cause his bones to crumble before he reached manhood, Hank Heywood, Jr. was saved from this by his father. He was given a metal ally to make his bones stronger, and joined the World Army after the Apokolips War, under the title "Captain Steel". 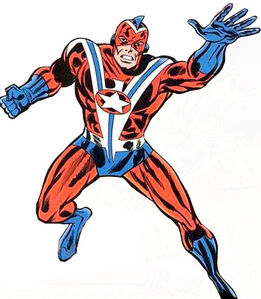 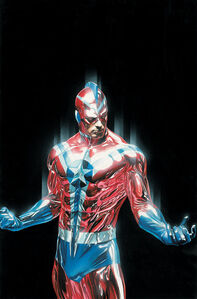 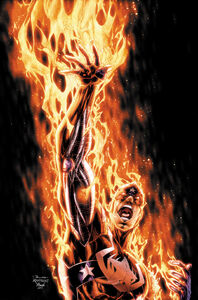