She is the niece of John Henry Irons, and later succeeded him in the mantle of "Steel" after saving him from Entropy Aegis, an armor designed by Darkseid. After joining the Everyman Project under the head of Lex Luthor, Natasha would take on the code name Starlight, and received the power of photokinesis. Once she received the ability to turn into mist due to the Exo-Genes from the Everyman Project, Natasha changed her name to Vaporlock and worked on stopping supervillains who received powers from the project.

She is the partner and love-interest of Traci 13, and member of the Superman Family (also known unofficially as Team Superman), Infinity Inc. II, Titans, Justice League (reserve) and Justice League Queer.

She was created by Louise Simonson, Chris Batista and Jon Bogdanove, and first appeared in Steel (Vol. 2) #1 in February of 1994.

Natasha Jasmine Irons is the daughter of Clay and Blondel Irons, the sister of Jemahl Irons, and the niece to John Henry Irons. Unlike her brother, she was practical and level-headed, and knew her uncle's secret identity as "Steel" alongside her entire family. She would go on to work as an intern for a senator when she was sixteen, but was kidnapped by the supervillain Hazard and later Plasmus, leading to her uncle having to save.

During the fight with Plasmus, the villain was frozen solid by John Henry, and Natasha caused him to shatter. Though she believed she killed him, Plasmus managed to survive due to his body being made of protoplasm from the radiation he received. After the death of her grandmother Bess, Natasha was devastated by the loss, but decided to stay in Jersey City with John Henry. She then traveled to Metropolis with her uncle when he opened up Steelworks, became his assistant and later reprogrammed the Kryptonian robot Kelex to use slang from popular hip hop music.

When John Henry was captured by the Entropy Aegis, an armor designed by the new god Darkseid, Natasha decided to create her own armor that used the power of Aegis. Teleporting to Apokolips, Natasha assisted Superman, Supergirl, Superboy and Pre-Crisis Supergirl in battling Doomsday, a creature created by the scientist Bertron. After saving her uncle, John decided to pass his mantle onto her, as he originally intended to do so, and created her new advanced suit of armor. When Superman was defeated by a ghostly ninja, Natasha came to his aid to stop the ninja with Traci 13 and Cir-El, and used her hammer to revive the Man of Steel.

During the "52" storyline, Natasha was forbidden from joining the Teen Titans after they needed new members, and John Henry destroyed her armor to prevent her from doing so. Her uncle wanted her to go to summer school, but Natasha decided to join Lex Luthor's Everyman Project after hearing a phone message from Luthor telling John that his DNA has been rewritten. Joining Infinity Inc., Natasha received the new code name "Starlight", and received Exo-Genes that empowered her with the ability of energy absorption, and solar energy manipulation. She served with Infinity Inc. until John Henry convinced her that Luthor was plotting something, and she started spying on him until she was caught.

She later returned to working at Steelworks for her uncle, and later fought Black Adam during World War III alongside several superheroes. At an unknown point, Natasha later changed her code name to "Vaporlock", and started to suffer from unusual alterations from being a experiment of the Everyman project. Natasha then decided to fight supervillains who received the Exo-Genes from the project, and later worked with others to fight them. During one fight, she was kidnapped by Desaad, but was rescued by Ravager and Miss Martian. 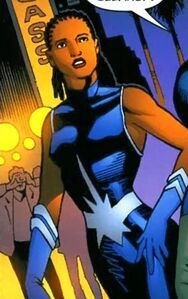 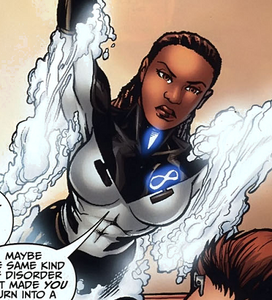