NOTE: This article is about the TV series version of Steel. For the film version, click here.

Steel is the main character of the TV series, Max Steel. He is an alien who became the only technology known as Ultra-Link. There is more than capable of running for being accused of Energy TURBO, and along with Max acts as Maxwell's armor McGrath. Steel core memory was damaged so many memories of his time selected on Earth 16 years before the series are confusing, and the battles with the Elementors imply that he had a connection with them.

Steel is a diminutive alien robot, known as an Ultralink. He is only able to function on TURBO Energy, without it he will permanently shutdown.

Steel can be quite obnoxious due to his snarkiness, but he genuinely cares for his friends. 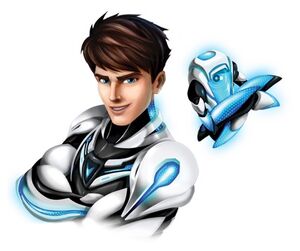 Steel with Max McGrath.
Add a photo to this gallery

Turbo Mimic Super Mode
Add a photo to this gallery
Retrieved from "https://hero.fandom.com/wiki/Steel_(TV_series)?oldid=1711931"
Community content is available under CC-BY-SA unless otherwise noted.