To Become Stronger than His Original Predecessor

Save Nana from Silver Horn (Succeeded)

Become the Successor to the Original Steel Massimo

Steel Massimo is a male Reploid that appears in Mega Man X Command Mission. He is the current successor to the original Steel Massimo.

Massimo was someone who suffered from low self-esteem and was cowardly, such as when meeting X and Spider, he was initially scared out of his wits. He tried to cover this weakness by seeking out the original Steel Massimo and hope to carry the title Steel Massimo.

During their confrontation with Silver Horn, and the latter mocking the previous incarnation, Massimo becomes enraged and avenges his predecessor. Afterwards, he starts to show more courage as the game progresses and by the end of the story, Massimo becomes a courageous full-fledged warrior, both mentally and physically, worthy of carrying on the namesake of Steel Massimo.

Massimo encounters X and Spider at Tianna Camp, he learns that they are planning to rescue the prisoners. As they got deeper into the POW camp, After rescuing Nana, Massimo learns on the computer records that the original Massimo was supposedly executed. A little later Massimo splits off from the group and meets the original Massimo, who was chained up and barely alive. He encourages his successor that he can be strong too and to keep the armor before succumbing to his injuries.

After joining up again with X's group, the three confront Silver Horn, who stomps on Nana and insults the original Massimo, pushing the current Massimo to knock him down with a single punch. After defeating Silver Horn, Massimo confesses his past to X and Spider, the two boosts his spirits and convinced him to help the group.

While X's party progressed through Professor Gauldile's laboratory, Massimo notices that someone else was following behind them (turning out to be Marino, who was sneaking past them), he looks back and dismisses it as his imagination. After their mission at Ulfat Factory and encountering Zero again (who is still troubled by Shadow's betrayal), Massimo tells X to give Zero time to calm down.

His next significant role was when he travels with X and Zero to the Vanallia Desert where he tries to rescue X from the quicksand, only to succumb to it himself. Zero tries to save them, despite the abuse he received from Ferham. Luckily the party survived, landing inside of a base where they soon confront Botos.

After the Rebellion Army's plans were thwarted, Massimo along with the other travel to the Heliport, where they were suddenly attacked, he was seen protecting the frightened Cinnamon. He travels with the team in a final attempt to stop Colonel Redips' plans.

In battle Massimo is a a heavy-hitter, and unlike the other character's (who need to equipped with an item, that allows them to counterattack) he can automatically counterattack an enemy. His weapon of choice are pole-arms (preferably a lance).

His Hyper Mode is Glint Armor, and his parameters are boosted as well. His Action Trigger fires a powerful beam (the power of the beam depends on how the player mash the buttons to reach it's strongest point). 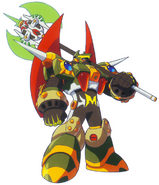