Doing the cannonball act with Marty.

Rescue Alex and his gang by Chantel DuBois

Chantel DuBois and her men

Stefano is a major character in Madagascar 3: Europe's Most Wanted. He is this hilarious comic character — he's always bubbling with excitement and enthusiasm and is up for anything.

He is voiced by Martin Short who voiced B.E.N. in Treasure Planet.

Stefano is a happy, fun-loving Italian sea lion who always looks on the brighter side of things. A true entertainer at heart, he’s up for any challenge to save the circus, even convincing Alex the Lion that the show must go on.

He also isn't over-estimating of himself, as when Alex tells him he's a genius, he replies that he's only "average intelligence", with some people saying he's "slightly below", and when Alex told him he might be "slightly above", Stefano denied it.

Stefano has lived in the circus all his life and loves it as much as he sees his friends as his family. In his younger years, he helped Vitaly out with his act of jumping through very small hoops that were impossible to jump through by placing the hoops the tiger wanted on a pole and standing back to watch the rest of the show. One day, Vitaly told him to take out the smallest hoop they had (a hoop that could easily be worn as a pinkie ring) and set it on fire. A big mistake when the tiger's olive oil coated fur caught on fire and Stefano had to rush in with a fire extinguisher to put out his friend.

Later, when Vitaly lost everything because of the accident (his wife, dignity, passion, even his soft fur), the sea lion tried to comfort his friend, but Vitaly roared dangerously at the circus animals. Stefano, scared out of his wits, ran off in fear of his angered friend.

Stefano is first seen when Alex, Marty, Melman, and Gloria try to escape animal control after being tracked down at the train station. He has a short argument with Vitaly the tiger, begging to let the troubled animals to be let aboard until they tell them that they are circus animals. After the rescue, Stefano was the first to speak to the "Circus Americano" animals, asking them about what their act was.

Later, after the circus was bought by the animals, they set up their act in Rome. Stefano opens the show, first telling the Zoosters that they will be blown away. Stefano balances poorly on a ball while juggling multiple balls, only to lose his balance and fall, somehow ending up with some of his balls caught in his throat and chokes on them. He gives himself the Heimlich maneuver, hitting an audience member and his fellow performers with the regurgitated spheres. He tries to continue his act but ends up failing miserably, only to add to the failure even more once he started honking his horns, which produced a horrible sound instead of music. Soon the circus flees with the audience members in hot pursuit, seeking a refund.

When the circus tries to flee Rome, Stefano was almost left behind when he dropped his horns and tried to go back for them, only to end up watching as the angry crowd stomped on them. He could have been stomped on, too, until Alex quickly went back, scooped him up in his arms, and saved the sea lion, who gratefully thanks the lion with a kiss on his cheek (probably much to Alex's disgust). That night, Stefano tells Alex (whose name he confused with "Alice", thanks to his Italian accent) to meet him outside the train and watches in both awe and horror as Alex "performs" what he thought was a very skilled "Trapeze Americano" move. When he ran down the carts to find Alex, he thought the lion had fallen off the train, but much to his joy and relief, Alex turned out to be just fine, holding himself between the carts to prevent himself from falling. He then takes the lion to the cart that had all the circus awards and posters and tells him the backstory of how Circus Zaragoza was once the most popular circus in all the world and Vitaly's life story. Vitaly, who jumped through impossibly small hoops to wow the crowd, got burned during one fateful attempt with olive oil and a flaming hoop as small as a pinkie ring. The result was that the circus fell into a rut for a long time.

Stefano then tells Alex that he believes that with the Zoosters' help, they can become number one all over again and goes along with Alex's plan to reinvent the circus. Following along with the plan, Stefano chooses to become a cannonball with the penguins helping him, while a concerned Marty watches. But when he loses his nerve at the last second, the sea lion gets blown higher than his target and ends up stuck on a cliffside, about to fall off. Marty shoots himself out of the cannon to rescue him. The zebra enjoys flying so much, he agrees to do the cannonball act with Stefano, forming a fast brotherly partnership with the sea lion.

Later, when they arrive in London, Marty and Stefano fist bump each other as they fly together and perform as proudly as the other circus animals did, winning an American contract to prove how much their circus has reclaimed their fame. However, when DuBois bursts in, she reveals the Zoosters' secret, and the truth is exposed, although the penguins take care of her by shooting her out of the cannon. Naturally, Stefano was crushed by this, much more than the other circus animals, and they split up with the Zoosters. However, when they arrive and set up the tent in New York City, Stefano sadly refuses to perform without the animals, especially Marty. When he learns that Alex, Marty, Melman, and Gloria were ambushed and trapped at the zoo, he goes along with the circus-themed rescue with the rest of the circus animals. He shoots out of his cannon and stretches a tightrope between the enclosures of Melman and Gloria, allowing them to escape.

However, after they are saved and before the circus animals could fly away, Stefano, who is left stranded in the zoo, calls out to them and begs them not to leave him behind just as DuBois, who emerges from the reptile house, furiously chases after the panicked sea lion. Vitaly tosses his throwing knives for the sea lion to use as a makeshift staircase, but just before the tiger can grab him, DuBois uses her rope to catch Stefano and threatens to kill him out of revenge for having her lion head taken away from her. However, Alex and Gia intervene and together, using their trapeze skills, after Marty shot a line, they rescue Stefano and Gia swings him safely over the zoo and right into the arms of Vitaly.

As Stefano and the other animals watch, Alex confronts the mad animal control officer. Everything about which Alex had lied to them comes true. The lion gets pulled up from a pool that was filled with aquatic cobras that had escaped from the reptile house, with the help of two dogs wearing rocket skates. Alex throws the vicious and ferocious DuBois in his caged habitat, where she is shot with a dart by Mort. He then grabs Gia and flies through a balloon net, causing lots of balloons to fall from the sky and land in the excited hands of children, which causes the overjoyed sea lion to cry tears of joy.

When Alex and Gia return, and after the dogs carry Maurice and Mort back on the circus platform, Stefano asks the Zoosters if they want to run away with the circus and, adding to his joy, they agree. Marty also responds by singing "Afro-Circus." In the end, Stefano is seen dancing to "Afro-Circus/I Like to Move It" with all of his friends while their train chugs across America, continuing their American Tour as one big happy family.

Stefano lights his lantern in front of the Zoosters

Stefano cheering for Vitaly as he does his hoop act.

Stefano horrified to see Vitaly get burnt, due to being covered in olive oil.

After Vitaly recovers from his wounds, Stefano tries to talk to him.

Stefano frightened when Vitaly aggressively roars at him. 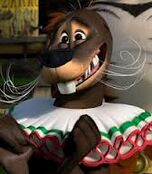 Stefano fliying in the Mountains by Skipper launching on the Cliffs

After the penguins get rid of Chantel DuBois, Stefano and the circus animals find a flyer of Alex.

Stefano and the circus animals discover that Alex and his friends are actually from a zoo.

Stefano shocked to discover that Alex and his friends lied to them.

Stefano becoming sad over the Zoosters lying to him.

Stefano becoming sadder when Alex confesses that he and his friends had joined the circus to get back to the zoo.