Stella, the Pink Bird is a bird that first appears in the Angry Birds Seasons episode Back to School, released on August 16. She is a supporting character in the Toons and Video Game, a major character in the film and the titular protagonist of the Angry Birds Stella game and Toons. She is the second to be a playable female, after the White Bird (third if one counts Jewel from Angry Birds Rio), and the first playable bird to be female that wasn't part of the original Flock.

As Pink Bird likes to blows bubbles, she may be a young member of The Flock. She shows signs of being childish (most likely, a toddler or maybe a preteen), but also very cunning, as she quickly thwarts the pigs' plans before they can launch them. She gets enraged easily, but is very happy when not. It was revealed in the Angry Birds Hatching a Universe and other media that she is a teenager. She is stubborn and unruly, and hates being told what to do.

In Angry Birds Stella and Angry Birds Stella (Animated Series), she is grown much older, around the age of a teenager. She is shown to have a extremely caring nature, and can instantly forgive anyone for their past wrongs to her. She tries her best to keep other birds happy and stays an optimist. Her heart is loyal and will fight for her friends and even at times, her enemies.

Stella's the star of the show and the bird all the others look up to. She may look cute and cuddly, but don't be fooled - if you push her too far, she'll soon reveal her blazing-hot temper! that's just how she rolls, sweet on the outside, and fierce on the inside.

She's a keen adventurer and is always on the look out for fun, which means she can get bored and grumpy if there's nothing to do. She's also extremely ambitious, and loves taking on tough challenges - but this means that she bites off more than she can chew...

Stella first made her debut in Angry Birds Seasons' Back to School. She then joins the rest of the Flock to assist them in preventing the pigs from once again stealing the eggs. She later helps them recover the eggs in Haunted Hogs and Winter Wonderham, now appearing in many levels, but not all.

Stella's the leader of the flock. She looks cute and cuddly, but don't be fooled - push her too far and you'll see the feathers fly!

Stella is very loyal to her friends and she's always looking out for them. She doesn't like bullies though, and she has a blazing hot temper that they'd do well to avoid.

Stella loves doing new things and so she always tries to cram as much fun into her days as she can!

Stella's so ambitious that she sometimes takes on too much, but she figures if you don't try something you'll never know if you like it!

Stella is fast as the wind and she's perfected the art of blowing bubbles that she uses to keep herself and her special friends safe.

FAVOURITE MODES OF TRANSPORT: Skateboard, Parkour (running and jumping across everyday objects as if you're in the gym!)

FAB FACT: STELLA IS THE ITALIAN WORD FOR STAR!

Like the Black Bird, the Orange Bird, and the Ice Bird, the Pink Bird's ability is activated when the screen is tapped, or after a couple of seconds after striking an object. When activated, the Pink Bird will surround itself in a bubble, which will expand after a few seconds. Any blocks or pigs within the bubble's range will trapped in either pink, green, or blue bubbles. All of the bubbles will then rise towards the sky. After a few seconds, the bubbles will pop, sending everything that was caught crashing down. The bubbles cannot protect any blocks or pigs they capture.

Pink Bird has less power than the Red Bird, aside when using her ability. She cannot destroy neither glass, wood, or stone without flinging her several times. Although she will damage glass, she is not good against any three unless her ability is used. Her bubbles can easily lift objects unless they are under several heavy bricks, like wood or stone. If that occurs, then most likely nothing will change in the level.

Stella's mini-explosion on her second impact makes her a very useful character. However, once made impact without using her ability she is weak. It is suggested the first structure she bounces off of is a weak unsupported structure or an explosive object, as her first bounce is not as affective as her second impact.

Stella appears to be a mother figure to Luca. She forces him to take baths and keeps him away from Gale, as Stella thinks she is dangerous. Luca also cares about Stella, as when she gains a phobia of flying, Luca tricks her into using her hang glider to save him. Stella forgets her phobia and jumps off the tree with her hang glider to save Luca, showing that she would do anything for his safety.

Poppy is one of Stella's best friends. While they fight often they clearly care for each other. Stella loves to jam with Poppy and her other friends, but she gets annoyed when Poppy gets a little too carried away while playing the drums. Poppy and Stella are seen laughing with each other in promo pictures for the game, showing their enjoyment of each other's company.

Stella and Willow are known to live on Bird Island before the pigs invaded the island, but not much is known about them before their departure to Golden Island.

Stella and Willow are good friends and when Stella is scared of flying Willow is the first to come up with a plan to help her feel better. Willow enjoy's Stella's company and lets her paint alongside her in Own The Sky.

Stella and Dahlia are good friends, but Dahlia often scolds Stella for her actions. Dahlia expects no nonsense out of Stella and is annoyed when she interrupts her during Dahlia's experiments. Nonetheless Dahlia looks to Stella as a daughter figure and partakes in helping her overcome her fear of flight.

Stella used to be best friends with Gale. In the Angry Birds Stella gameplay trailer, a photograph is seen with both Stella and Gale. Unfortunately, the two went separate ways when Gale discovered a crown that put her in command of the pigs. She jumps into an active volcano in order to save Gale from death; and is heartbroken with the loss of her.

When Gale is found alive Stella immediately welcomes her back, forgiving her for leaving the group for the fame from the pigs. She looks after and cares for Gale until she gets better. They then play the song from Rock On! and Gale sings along, showing that they have history of jamming together. Stella is disappointed when Gale instantly goes back to her old ways. In You Asked for It, Stella and Gale reconciled their friendship when she turned her into gold with the golden egg.

Stella, at first, dislikes the minion pigs due to them destroying the vegetation in Golden Island for Gale, or either continuously steal the eggs from its nest for King Pig in Piggy Island. She beats many of them in defense.

Although Stella has had rocky history with the pigs, because of her caring nature she lets some pigs sleep in her house. The pigs take advantage and she gets annoyed, but still stands up for them even when the rest of her friends protest.

Due to Stella being a teenager she doesn't like being told what to do, and since Red is the leader, since it's his job to act as a leader. Although, they can get along sometimes in Angry Birds POP!, they seem to be having fun with each other.

Stella is physically weak against all materials, as flinging her three times cannot shatter a single Wood block when shot consecutively.

As her second ability, Stella is more useful. She can ricochet off of 1 surface and then crash to the next, causing a small explosion.

Like Bomb, Bubbles, and the Ice Bird, Stella's ability is activated when the screen is tapped, or after a couple of seconds after striking an object. When activated, Stella will surround herself in a bubble, which will expand after a few seconds. Any blocks or pigs within the bubble's range will trapped in either pink, green, or blue bubbles. All of the bubbles will then rise towards the sky. After a few seconds, the bubbles will pop, sending everything that was caught crashing down. The bubbles cannot protect any blocks or pigs they capture. 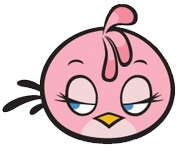 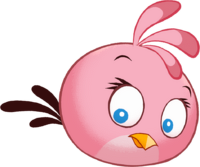 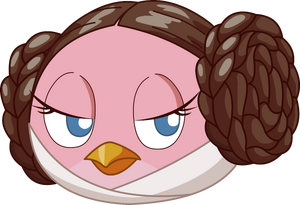 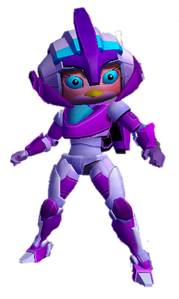 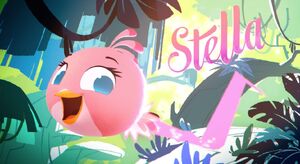 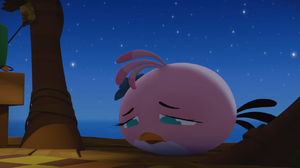 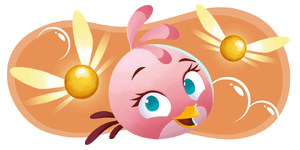 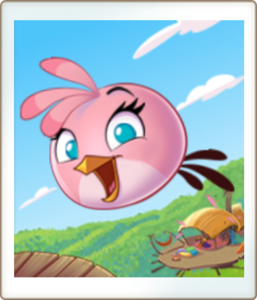