Taking care of her people.

Stella is the secondary antagonist-turned protagonist (determinant) supporting character in Minecraft: Story Mode, specifically in Season 2. She is the leader of Champion City, and is Jesse's rival.

She is voiced by Ashley Albert.

Stella first appears in this episode, where she sees Petra and Jesse walking to the middle of her city. She calls Jesse her sworn rival, which Jesse can either agree or disagree to. She also tells one of her bodyguards to take Lluna to her house.

Later, Jesse and Petra get the latter's sword, Miss Butter, back from Stella's collection. She gets mad at them at first, but then allows them to leave with Miss Butter.

Stella is a person who was rude, obnoxious, and immature at times. She often acts like a bully towards Jesse and Petra, wanting more attention than them and often making unkind comments about them. On certain view she seems to be ungrateful toward Jessie as she decided to leave him/her for Romeo even if the former one rescued her from ice thawt.(surprisingly she will wink at him/her, arguably because she might be pretending to work with Romeo as a strategy that could be useful to Jessie).

What really makes her a villain, however, is the fact she often abuses her pet llama, Lluna, cheating on others, and indirectly stealing Petra's sword, Miss Butter, by having it put on display in her treasure room, along with other valuables she got from people.

Despite all this, Stella does truly have redeeming qualities, as she genuinely cares about her people. If Jesse gave Xara her bed, Romeo destroys Champion City, which deeply saddens Stella. She will even express sympathy for other people, as she is worried if Romeo kills Xara due to Jesse not giving her the bed. A part of her strongest redeeming quility is her insecurities where she enforces Invisibility in her sympathetic emotions or often tries to replace her lack of love and acceptance from others with power and respect. She can be fully redeemed if Jesse allows her to be part of his/her group thus showing her loyalty matters and helping her change her ways. 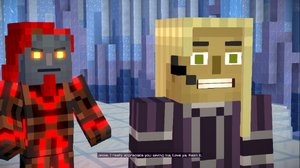