The New Girl (by the Loud kids)

Hanging out with Lincoln and his friends

Stella Zhau is a student who is a supporting character in 3rd-4th season and one of the main characters in the fifth season of Nickelodeon series The Loud House.

She is voiced by Haley Tju, who also voiced Karmi in Big Hero 6: The Series, Marcy Wu in Amphibia and Alia in Arlo the Alligator Boy.

Stella has a slightly darker skin tone, has shoulder-length black hair, has freckles, and her eyes aren't fully rounded like most of the cast, making her ethnicity hard to discern. It is later confirmed that she is a Filipina.

Stella is quite friendly to Lincoln and his friends, though she does have her standards. She admits that she enjoys hanging out with Lincoln and his guy friends and soon becomes a frequent member of the group, in spite of the awkwardness. Likewise, Stella has an interest in technology, specifically with breaking apart tech and putting it back together.

Stella first appears in "White Hare" with only top of her head shown, she was sitting alone in the school bus lonely, Lincoln boards the school bus and approaches her. He introduces to her and she gets charmed at him, lets him sit down with her and offers him some carrot sticks.

She finally appears in "Be Stella My Heart". She enters the school cafeteria with the other kids, approaching Lincoln and his friends asking for a trade for her carrot sticks. At Gym class she approaches them asking if they doing a defensive formation and wishes good luck. Then at Science Class she once again approaches them asking for a lab partner, but they anxiety kicks in and dropped their experiment blackening them. Later they finally realize that Stella like one of them. As they clean themselves up She approaches them and asks Lincoln to come with her to the Burpin Burger and he proudly accepts believing she going to date with him, (unaware of her true intentions she only want become friends with him and the others). The next day Lincoln informs the others what he and Stella did that day, then Stella arrives and thinking for another hangout with him. But to his and the others' shock, she approaches Rusty asking to if he want to go to the flea market and he proudly accepts making Lincoln jealous. Before long Stella starts to hang out with the others making each one of them jealous. Later Lincoln discovers why Stella is hanging out with the others, that she is "blowing out of the water" from the Dreamboat episode which his sisters are watching.

The next day Stella was in the cafeteria listening to a rock music and is unaware of the event is happening behind her. Later at Gym class she, Girl Jordan, Penelope and the others watch in bemusement at Lincoln and his friends attacking each other over to her. Later they confront her and say they do not want more business with her and she responds that she only want to be friends with them and sadly leaves realizing that they are perceiving her. Later at lunch, Stella was eating along, Lincoln and his friends apologizes to her for perceiving her actions the wrong way, but she does not respond and they decide to leave believing she is now furious with them. However she was not really furious, asks them for a trade lunch and they happily accepts successfully rekindling their friendship and she shows them a new formation called The Scorpion Formation and they proudly accept and let her be part of the group. 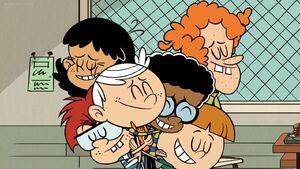 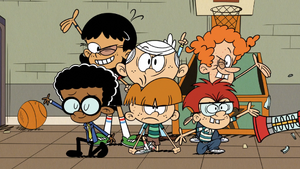 Stella and her friends forming their news strike pose. 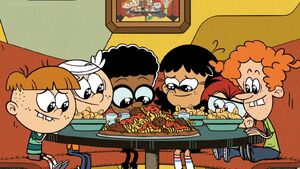 Stella and her friends are happy to have a pizza with spaghetti meal. 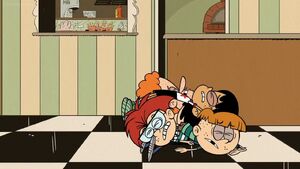 Stella and her friends (except Clyde) passed out on pile up.