He is voiced by Patrick Warburton, who also voiced Kronk, Wolf W. Wolf, Buzz Lightyear, and Joe Swanson and portrayed by Michael P. Northey in the live-action film.

Mr. Barkin is a substitute teacher at Middleton High School -- almost always, in fact! -- for unexplained reasons of frequent injuries, sickness, or vacation among other staff members. Barkin teaches a variety of classes, ranging from gym to driver's ed to home economics, leading to him being dubbed the school's "permanent substitute" by the show's staff.

Unlike most fictional teachers in "high school hero" franchises, Barkin is fully aware of Kim and Ron's missions and has, by accident or design, become personally involved in several of them.

Barkin's manner is analogous to a military drill instructor, typical of most PE teachers in most Western cartoons and one Japanese anime, School Rumble. As such, he is a gruff, no-nonsense character who is easily provokable, and with little to no sense of humor. He is typically abrupt and abrasive with students and is a stickler for punctuality and proper decorum.

Barkin tends to be skeptical of things that he does not understand, especially when the explanation goes over his head. For example, while grading science experiments, he commended two students for building the classic volcano out of vinegar and baking soda, but cast extreme doubt on a device capable of tearing a hole in the space-time continuum. He ended up activating the device and unwittingly releasing a genetically engineered dinosaur that had been trapped in the rift earlier in the episode.

Barkin's personality has brought him into conflict with the show's protagonist on a number of occasions, primarily when he believes that Kim's missions or social life are encroaching on her school work, or when he feels that she has not been paying attention. He has also been shown to be particularly harsh with Ron, whose laid back personality conflicts with his own, and has been known to pick him up by the lapels and shake him in frustration. Despite this, Barkin tries to take a "tough, but fair" approach. He doesn't play favorites in his classes, and will give "credit where credit is due," regardless of what he thinks of the student at other times. Additionally, while Barkin typically likes to be in charge, he has also been shown to defer to others quickly, and without argument, when he recognizes that their experience outstrips his own.

He has also been shown to have a more gentle side that includes an appreciation of baked goods, serving as the den-mother ("Brigadier Pixie") of the local Pixie Scouts chapter (although he ran the unit like a division of the United States Army Rangers), and an enthusiasm for housewares. It was also revealed that he sleeps with a stuffed teddy-bear.

He is also revealed to have served in a war (presumably the Vietnam War), where he achieved the rank of Lieutenant, conducting himself more like a drill sergeant than a teacher. His military service would also explain his strict no-nonsense attitude. He tends to panic in a major crisis, which indicates that he may suffer from Post Traumatic Stress Disorder (aka shellshock) as a result of some bad wartime experiences. This has made him extremely paranoid, and he often jumps to completely irrational conclusions that usually involve some sort of conspiracy, government or otherwise. He has also been prone to hysteria and in an incident where he was stuck in a crate with Ron he tried to "survive" by getting Ron to dig a hole in the crate with a "shovel" (actually a high heeled shoe) while he plants herbs by harvesting dirt from their socks, he also claims that a cow in the crate is Mr Barkin, and speaking to a rubber chicken as if it's a radio transmitor.

Little about Barkin's history, prior to Season 1, has so far been revealed. His father's name is Franklin. It is known that he attended military school as a child and that he served as a Lieutenant in an unidentified military conflict (most likely the Vietnam War), where he was stationed "ten clicks north of Jai Alai," during which time he learned how to cook. It is also known that Barkin has been a teacher in Middleton since at least the time that Kim and Ron were in 9th grade. It is implied that he has been there much longer.

During "Graduation", the finale episode, he mentioned that before his own graduation he was a "big man on the football team", "dated the most popular girl in school", and even "helped save the world from time to time". That indicated that he had a past somewhat similar to Ron. However, for some strange reason it didn't go right for him, and was probably what makes him so mean and possibly bitter. 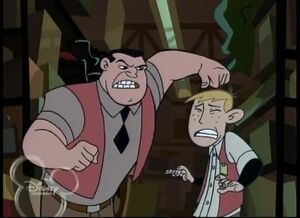 Retrieved from "https://hero.fandom.com/wiki/Steve_Barkin?oldid=2056598"
Community content is available under CC-BY-SA unless otherwise noted.