Start a Wiki
Steve Burnside is the deuteragonist from "Resident Evil Code: Veronica".

He was a prisoner sent to Rockfort Island prison along with his father. This was due to his father, an Umbrella employee, selling the company's secrets at auction. When he was caught, his wife was killed.

He is voiced by Bill Houston in "Code: Veronica" and Sam Riegel in "The Darkside Chronicles". 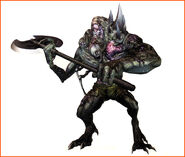 Steve after he was injected with the t-Veronica Virus
Add a photo to this gallery
Retrieved from "https://hero.fandom.com/wiki/Steve_Burnside?oldid=1909580"
Community content is available under CC-BY-SA unless otherwise noted.