Very loyal to the Winslow family and wants to date the win slows daughter Laura after being rejected by her around season 1-6.

Exclusively dating Myra.
He and Myra broke up and he and Laura officially dating.
He helps people when they ask him.

Steve Urkel is the main protagonist of the TV show, Family Matters. He lives right next door to the Winslow family. He is smart, goofy, clumsy, and has a squeaky voice. He is played by Jaleel White. Originally, Steve was meant to be a one-shot character, but he was so popular that he took over the original protagonist as the lead character. One of his most heroic acts is in the "Paris Vacation" episode when he saves Carl and his family from the thugs wanting to hurt him.

In another episode, he warns Carl to unplug a lamp before working on it, but the latter doesn't listen, resulting in a shock that makes him pass out. Because of this, Steve does CPR on him, and he has Eddie and Waldo call 911 and get the first aid kit, respectively.

Steven Quincy "Steve" Urkel was introduced as The Winslows pesky, annoying next door neighbor. It was revealed that he likes coming over to their house more than his own because he sees Carl and Harriette as the loving parents that he should've had. Steve's own parents, Dr. Herb and Diane Roberta Urkel have nothing but the utmost contempt for him and do their part to avoid him at all times. In season 5's Dr. Urkel and Mr. Cool, while he was Stefan Urquelle, they showered him with love and introduced him to the rest of his relatives. It was also revealed that, although nerds themselves, Dr and Mrs. Urkel are very shallow people and prefer Stefan's company over Steve's any day. The viewers also sees that out of Steve's relatives, only four of them really care for him. His Uncle Ernie who owns a horse trailer, revealed in both The Big Fix and Requiem for an Urkel. He maintains a good relationship with Aunt Oona(Donna Summer) from "Altoona" and she aside from Estelle Winslow is the closest thing he has to a mother figure. He's very close to his Scouthern Belle cousin, Myrtle Mae Urkel and she treats him like her brother. It was also implied that his uncle, Cecil, also cares for Steve. It was revealed in season 8's Nightmare at Urkel Oaks, that his other uncle, Big Daddy Urkel, is a peanut farming mogul who did not think Eddie was a good choice for his daughter except when bribed with cash. It was mentioned in Season 2 that Big Daddy and the other relatives (excluding Oona, Cecil, Ernie and Myrtle) pay Steve a lot of money not to visit them. However, they tolerated him after he got a makeover and was less clumsy. Steve has a gangster cousin from Detroit named Cornelius Eugene Urkel (also played by White) who went by the moniker "Original Gangsta Dawg". He tries to avoid him at all costs because every time he visits, he wants money from him. Steve also has another cousin named Julie (who is a friend of Donna Jo "D.J." Tanner, who lives in San Francisco (as a crossover with Full House). It was revealed in Season 2's Busted that the Urkels are very good at gambling and have a sixth sense which allows them to win at casinos. Eddie's unlicensed driving to impress Jolene left him with an $800 damage to Carl's beloved station wagon and has to secretly fix it before he finds out. He and Steve headed down to Mom's Bakery which secretly hosted an illegal casino. Raking in a win over $32,000 and on their way out, both boys along with the other gamblers are arrested by the police during a raid. Carl eventually paid their bail and found out about the damage to his car anyway and telling his father, Dr. Herb Urkel, about what he and Eddie had done tonight. Also it's was revealed in Season 7's Tips For a Better Life when Urkel accidentally damaged Carl's Bedroom floor with his latest invention and he was punished by Carl and Carl immediately ordered him to pay for it. Throughout the episodes Steve always caused Carl lose his patience by his antics causing him to yells "STEEEVE!!!!!!!!!!!

Steve was shown to have an obsessive crush on Laura. But she didn't return those feelings until later (and in one episode, Steve finally stood up to Laura when she was still being mean to him and ordered her to respect him). Despite that, she has shown appreciation for the kind things he's done for her family. Laura has also dated guys who would bully Steve(and have one consider him competition in Stormy Weather), but it would end with him warding them off. He suspects their hidden motives were to take advantage of her and refuses to let that happen(though it'll take Laura until the near end of the episode to learn their motives). Steve sometimes went to her house and tried to flirt with her. At the same time, he does respect Laura's personal space, unlike Myrtle who kept stalking Eddie much to his extreme terror(until Don't Make Me Over). Laura is now Steve's wife, and they live quite comfortably with a daughter named Stephanie.

Steve's friendship with Eddie was a bit one sided. Eddie would see him as nothing more than a nerd, while Urkel hero worships him as a friend. Eventually, this grew into a long lasting friendship. Eddie is now Steve's brother-in-law or would have been if the show gone on for a another season.

Myra was introduced as both Ted Curran's cousin and a potential girlfriend for Steve just so Laura can have some breathing space. He was initally attracted to her because she was sweet and intelligent and didn't care of what others thought of both her and Steve. Urkel was soon repelled, however, by her jealous and possessive nature when she came to the conclusion that Laura was serious competition for his love. This was explored in both seasons 5 and 9 when he saw what life was like in Laura's shoes when she pursued him relentlessly. He and Myra dated during seasons 6-8. In season 9, they grew apart when Steve learned that she hated his makeover and demanded that he goes back to the sexy nerd she loved. He refused and Myra broke up with him first, though it later was learned that she only pretended to do so in order to get Urkel to renounce his love for Laura and stay with her. When Steve refused, she resorted to not only suing him, bur also stalking and spying with illegal subservience gear in her bedroom. She teamed up with Stefan and both set out to win their true loves back. Though initially successful, Laura still wanted to date him and Myra vowed never to rest until Steve is hers once and for all. Urkel soon learned that she was spying on him with a mini hidden surveillance camera in his glasses and demanded she renounce her love for him immediately because he loves Laura. Myra refused and got her arrested for stealing her watch. However, Urkel was able to drop the charges and expose her for spying on him with illegal spy gear. The police took everything from Myra's room and pursued criminal charges. In the ending credits of the episode when she had Laura arrested for stealing her watch Laura was arrested again for assualting her. When she learned of his and Laura's engagement, Myra continued to hold the torch even though he didn't love her. It's unknown what happened to her after that. If the show had continued on to it's final season, it was revealed that Stefan stopped Myra from ruining Laura and Steve's wedding. She finally relinquishes her love when meeting Steve's cousin, Cornelius|.

A one time only character whom got along with Steve right away. Laura was instantly jealous of the two when they started dating. However, they broke up when Steve not only introduced her to the president of the chess club, but also admitting that he still loves Laura.

Vonda was a girl that Eddie dated in season 3. She had crush on Steve in The Love God, after he tutors her in a class she was failing in. Worried that she may sell herself just to have guys date her, he teaches Vonda the dangers of making herself easy and accept herself for who she is. Though she felt better about it, Eddie wanted to beat up Steve for interfering.

One of Laura's best friends whom had little to no patience for Urkel in Season 1. She has shown concern for him once in the episode, In a Jam.

Unlike most of Laura's friends, Maxine's feelings for Steve were much kinder due to their similar situations with neglectful parents.

Another one of Urkel's friends, whom may be dimwitted at time, but Waldo has a key sense of morality and is an excellent chef. He originally started of as a sidekick to resident bully, Willie Fuffner, but grew up later on.

Urkel's relationship with Rodney is a bad one. Rodney had no patience with his antics, while Urkel sees him as a slacker.

Eddie's girlfriend who's feelings for Urkel is like Maxine's own, except she was dealing with a controlling father. She was the one who helped Steve point out Eddie and Laura's pranks as nothing more than immature and childish. 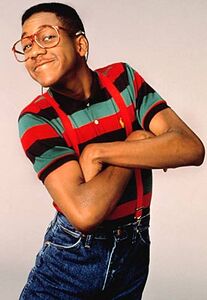 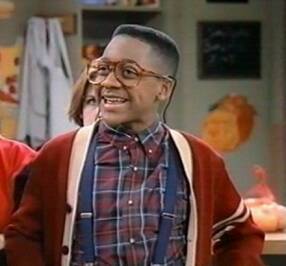 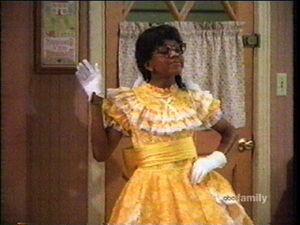 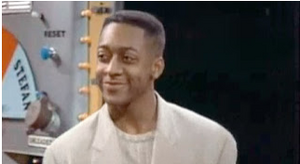 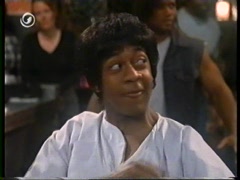 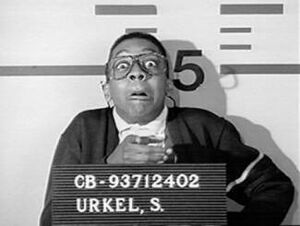 Steve Urkel is jail
Add a photo to this gallery
Retrieved from "https://hero.fandom.com/wiki/Steve_Urkel?oldid=1679392"
Community content is available under CC-BY-SA unless otherwise noted.